In August 2022, provisional life expectancy estimates1,2 for 2021 were released, showing Americans had lost nearly three years of life expectancy during 2020 and 2021. In December 2022, the finalized mortality report3 confirmed these shocking data.

Shocking Decline in US Life Expectancy

As Virginia Commonwealth University professor of population health Dr. Steven Woolf told USA Today,8 “That means all the medical advances over the past quarter century have been erased.”

Life Expectancy Has Dropped Across All Age Groups

Age-specific rates of death increased across all age groups as follows:9

As you can see, something very strange is going on here. While life expectancy dropped across all age groups, the age groups with the highest increases in mortality were working age adults, 25 through 54, followed by children between the ages of 1 and 4.

The leading causes of death in 2021 were heart disease, cancer and COVID-19, all three of which were higher in 2021 than 2020.10 Unintentional injury and stroke also significantly increased in 2021.

Heart disease, stroke and cancer are all now-known side effects of the COVID jabs. Unintentional injuries may also be due to the shots, as you may easily be injured if you pass out or suffer a heart attack or stroke while doing just about anything.

Woolf, however, believes low COVID-19 jab rates and general poor health of Americans are to blame for the increased mortality. In addition to disregarding the fact that the primary causes of death are side effects of the COVID shots, working age adults and children are also, comparatively speaking, the healthiest groups in general and ought to have a lower risk of death from any cause, but especially heart disease and cancer.

And, since they have a far lower risk of dying from COVID in the first place (compared to the elderly), a slightly lower COVID jab rate in this age group is unlikely to have made such a huge difference.

‘Sudden Death Syndrome’ May Be Driving Down Life Expectancy

It refers to the difference between the observed numbers of deaths (from all causes) during a given time, compared to the expected number of deaths based on historical norms, such as the previous five-year average. (Formula: reported deaths minus expected deaths equals excess deaths.)

Across the world, excess mortality has dramatically risen since the start of the pandemic, and barely a day now goes by without a healthy adult suddenly dropping dead with no apparent cause. People have died during live broadcasts, in the middle of speeches and during dinner.

Clearly, they were feeling well enough to go to work, to an event or a restaurant, and something caused them to instantaneously die without warning. These are the people making up these excess death statistics. They shouldn’t be dead, yet something took them out.

Excess Deaths Took Off After the COVID Jab Rollout

While COVID-positive deaths were part of the equation in 2020, excess deaths really took off after the rollout of the COVID jabs, not during the height of the pandemic as one would expect if COVID-19 was the real killer.12 Besides, we already know that “COVID-19 death” simply means that the person tested positive for SARS-CoV-2 at the time of death or just prior to it.

If the COVID jabs worked, you’d expect excess mortality to drop, yet that’s not what we’re seeing. We’re also not seeing mass death from COVID. The only clear factor that might account for these discrepancies is mass injection with an experimental gene transfer technology.

If the COVID jabs worked, you’d expect excess mortality to drop, yet that’s not what we’re seeing. We’re also not seeing mass death from COVID. The only clear factor that might account for these discrepancies is mass injection with an experimental gene transfer technology.

More Working Age Adults Were Coerced Into Taking the Jab

Life insurance data confirm that it’s working age adults who are dying in record numbers, which is what’s really driving down life expectancy. In the third quarter of 2021, the death rate of working-age Americans (18 to 64) was 40% higher than prepandemic levels, and these deaths were, again, not attributed to COVID.

As noted by Dr. Robert Malone in a January 2022 Substack article,14 workers were forced to accept the toxic COVID jabs at a higher frequency relative to the general population. This, I believe, is the real answer to why they’re dying at a disproportionate rate.

As for children under 4, well, toxins tend to be more dangerous to younger children, so it’s no great shock that the death rate for children has risen more than the rate of older people. After all, we’re now giving these toxic COVID jabs to babies as young as 6 months old.

As mentioned, the leading causes of death in 2021 were heart disease, cancer and COVID-19. Data analysis by The Ethical Skeptic15 — self-described as a former intelligence officer and strategist — shows cancer deaths are now being mislabeled as COVID deaths. The suspicion is that this is an effort to hide the fact that the COVID shots have resulted in soaring cancer rates.

Seven of the 11 International Classification of Diseases (ICD) codes tracked by the U.S. National Center for Health Statistics — including cancer — saw sharp upticks starting in the first week of April 2021, which is when large swaths of the American population were getting their first COVID jabs.

According to The Ethical Skeptic’s analysis of U.S. Morbidity and Mortality Weekly Report (MMWR) data, the CDC has been filtering and redesignating cancer deaths as COVID deaths since Week 14 of 2021 to eliminate the cancer signal.16

The following two charts illustrate how cancer mortality is being artificially suppressed. As explained by The Ethical Skeptic:17,18 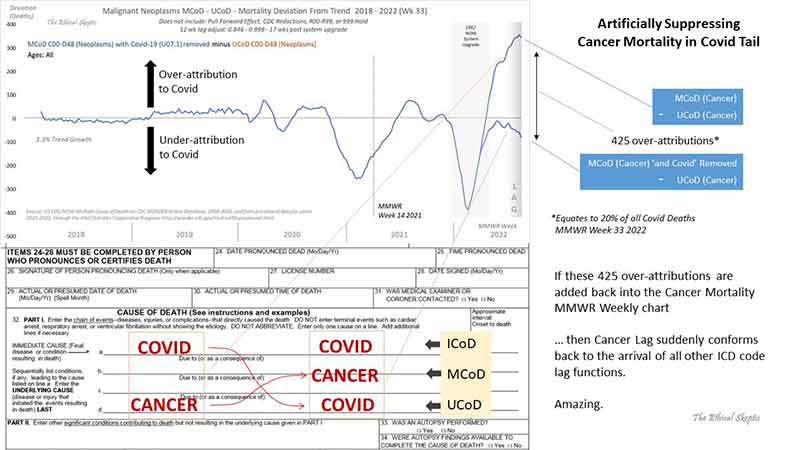 “This results in 20% of all COVID deaths each week, also happening to be persons dying of Cancer — which is egregiously higher than it should be. This is clear over-attribution = equates to exactly the difference between the Cancer and All Other ICD-10 code lag curves.”

The problem facing the CDC, is … What does one do when COVID Mortality is no longer substantial enough to conceal the excess Cancer Mortality?”

So, to rephrase, what The Ethical Skeptic is saying is that 20% of the weekly so-called COVID deaths are cancer deaths, which is rather astounding. Swapping the underlying and main causes of death, listing COVID as the main cause, hides (to some degree) the fact that cancer deaths are going through the roof.

According to his analysis, the COVID shot is killing 7,300 Americans per week. COVID, meanwhile, is killing 1,740 people.19 What will the CDC blame when COVID disappears, and they can no longer swap the underlying and main cause of death designations? Time will tell.

In the meantime, cancer is already one of the leading causes that is prematurely killing Americans, and uncontrollable turbo-charged cancers only started to occur after the rollout of the COVID jabs.20

Collins either has an agenda or is seriously confused, as statistics show whites in general had the highest COVID jab uptake rates when the jabs came out, and people who took it were far more likely to promote the jab than discourage it. As reported by the Kaiser Family Foundation:21

Over the course of the vaccination rollout, Black and Hispanic people have been less likely than their White counterparts to receive a vaccine, but these disparities have narrowed over time and reversed for Hispanic people.”

Christians in general also haven’t been particularly “hesitant” about getting the jab. An investigation by the Public Religion Research Institute found22 56% of white evangelical protestants got jabbed, as did 74% of White mainline protestants and 79% of white Catholics. For some reason, the jab rates among Black religious affiliations were not assessed, so we have no idea whether religion has influenced Blacks to reject the shot.

Bear in mind, the COVID jab rate for the U.S. as a whole (one dose or more) is 79%,23 so Christians in general are about as average as you can get. Granted, evangelical protestants have a significantly lower rate, but is Collins suggesting white evangelicals are causing Blacks to reject the jab — because Blacks had, and still have, the lowest jab rates.24

The Use of Scapegoats Is a Classic Prejudice Builder

As detailed in “Vaccines Are the New ‘Purity Test,'” the Nazis used a four-step process for dehumanizing Jews,25 — prejudice, scapegoating, discrimination and persecution. By scapegoating Jews as dirty and diseased, the German public was indoctrinated into agreeing with, or at least going along with, the Nazis’ genocidal plan.

Over the past three years, we’ve seen how government officials have repeatedly tried to pin blame for the spread of COVID on one specific group or another. Fortunately, these narratives didn’t stick in the long term, but they did do significant harm for a time.

Collins’ attack on evangelical Christians is just the latest example of how they try to maintain control by seeding division among races, religious and political groups. The more we distrust and fear each other, the less we pay attention to the real criminals.

But, in order for this the division attempt to work, there must be a target, a scapegoat, toward which people can direct their frustration. COVID-19 is now endemic and a rare threat to anyone. COVID narratives are simply being recycled to keep the fear of illness and distrust among people going.

It’s important to realize, though, that fear is the No. 1 destroyer of freedom. The greater your fear, the more you’ll obey, and the more you obey, the more freedom you must give up. And freedoms relinquished are never voluntarily given back by those in power. People throughout the ages have always had to fight to regain freedoms lost.