When They Are Trying to Kill Us, Do Their Motives Matter?

by Tessa Lena
in Cross-Posted, Opinions

This story is about living in a world run by crazy people with access to powerful technology. This is the world we are in. We are in a world run by genocidal maniacs. It is our life. It is our challenge. So what do we do? I’ll get to my personal answer to this question at the end of the article but first, let’s look at a paper about a new artificially created pathogen with high transmissibility rate and the disease mortality rate of 80%.

Recently, a preprint came out of the paper titled, “Role of spike in the pathogenic and antigenic behavior of SARS-CoV-2 BA.1 Omicron.” 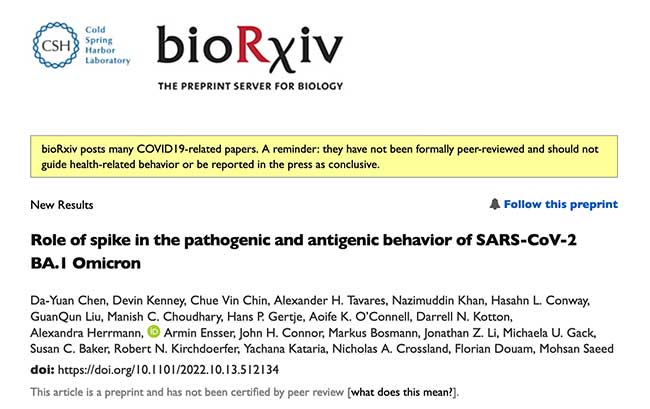 Here is what the preprint is saying (the emphases are mine): “The recently identified, globally predominant SARS-CoV-2 Omicron variant (BA.1) is highly transmissible, even in fully vaccinated individuals, and causes attenuated disease compared with other major viral variants recognized to date. The Omicron spike (S) protein, with an unusually large number of mutations, is considered the major driver of these phenotypes.

We generated chimeric recombinant SARS-CoV-2 encoding the S gene of Omicron in the backbone of an ancestral SARS-CoV-2 isolate and compared this virus with the naturally circulating Omicron variant.

In K18-hACE2 mice, while Omicron causes mild, non-fatal infection, the Omicron S-carrying virus inflicts severe disease with a mortality rate of 80%. This indicates that while the vaccine escape of Omicron is defined by mutations in S, major determinants of viral pathogenicity reside outside of S.”

I would like to quote Dr. Paul Alexander whose response says it all: “The question is why? Is anyone policing these crazy idiots? Is this bioweaponry?” Now, the fatality rate of the chimera was determined based on the results in “humanized mice” … but so was the approval of the bivalent boosters!

And again, like I said many times before, I am far less interested in the motives of the crazies than I am in the practical implications. Our society is very compartmentalized, the left hand never knows what the right hand is doing, and a large number of people never even tried to think about the big philosophical picture.

So the scientists might be excited about the “power over nature,” and the scientists; sponsors might be genocidal, and each participant might practice their own style of being destructive to the human species — but in the end, the really important question is the one that Dr. Alexander is asking: “Who is policing these crazy idiots”?

To quote more of Dr. Alexander, “Menachery and Baric et al. in 2015 told us they just created the very situation we faced with COVID virus, in 2015 and they did not stop.

They went stir crazy raving mad in 2015 and beyond, inserting furin cleavage sites (a 9 amino acid genetic sequence just in-between the junction of the S1 and S2 subunits of the spike glycoprotein) into any and every bat coronavirus and chimera they could produce, stitching together parts of coronaviruses or whole viruses to see the ‘spillover’, zoonotic jump from animal to human, to test how infectious and lethal they could make the spike. They did and it seems there are more MADMEN around.”

Prepper Meds – Stock up for now or if the supply chain crashes:
✔️ Boost your immune system with Nutraceutical by Dr. Zev Zelenko
✔️ Beat supply chain issues with 5 Antibiotics Delivered to Your Home
✔️ Be ready to help yourself and your family with the World’s Best Med Kit

Whenever I think about synthetic biology, my mind goes back to the obnoxious article on the World Economic Forum titled, “From synthetic life to engineering the climate – how we’re learning to manage the Earth.”

“It is common to think about “process” in commerce, industry, and society. A well-designed, well-managed process is essential for producing “products” that are desirable across numerous social and business realms …

If Earth’s products are the magnificent array of species that populate the Earth, together with the mountains, deserts, and oceans where they dwell, then its processes are the major biological, geological, and physical forces responsible for creating these products in the first place.”

“So, what would it mean to talk about “well-designed” and “well-managed” Earthen processes? The question is an odd one because these processes … originated without us and they continue to operate independently of us.

Short of the idea of some sort of divine architect responsible for setting them up in the first place, any talk of a management or design seems entirely out of place. Gravity, photosynthesis, and genetic mutation have never been in our species’ wheelhouse. They are the timeless and independent backdrop against which every civilization has been fashioned …

Despite the startling impact of humanity on Earth’s products, the processes that shape it have not yet fallen into human hands. Not, that is, until now.

New technologies are fast arriving that will permit the management of fundamental Earth-shaping processes. Two examples of these technologies are climate engineering and synthetic biology.”

How is that one going?

Here is a thought experiment. For a long time, Dr. Marin Pall has been screaming from the rooftops saying that the rollout of 5G was not a good idea at all and that if the rollout occurs, it could cause disease on a massive scale.

Massive scale 5G rollout has happened, and even before the vaccines rolled out — and especially after they rolled out — many people got sick with mysterious ailments. But because there can be more than one factor impacting our health (what a revolutionary concept), we are not allowed to even think in the direction of 5G without sounding crazy.

It is like poisoning one’s soup with arsenic while simultaneously poisoning one’s wine with a cyanide while also trying to nuke their house, and then not being able to identify the cause of death because, according to experts, arsenic, cyanide, and nukes are safe and effective. And it’s written right there, in black and white, in an official paper, sponsored by the investors into the companies manufacturing arsenic, cyanide, and green nuclear weapons!

Crazies With a “Savior Complex” or Genocidal Maniacs?

One of the main objections from respectable people is that there could be corruption — even bad corruption — but surely, no evil motives, and the reason for that is that we live in a “normal” world in which large scale conspiracies don’t happen. When I get to that part of the conversation, I usually say, very sincerely, that I don’t care if the people bringing destruction to our species think of themselves as saviors or just like killing.

In my recent article called, “What is a Conspiracy?” I argued that “it is possible that Klaus Schwab believes his own b*****t and thinks that the Great Reset is good for our species. But does it matter? Most likely, even classic serial killers follow their own internal logic that makes them “not villains” — but none the less they are killing, and conspiring to do so! And, on a side note, there is nothing new about the practice of combining one’s “missionary obsession” with personal profit!”

The history of our species is proof that genocides are not a figment of imagination and not an abstraction — and while it is usually hard to scholastically “prove” a genocide in real time due to the proximity and the narrow view of the observer, people in the West seem to be dying at a higher rate than usual and giving birth at a slower rate than usual. And it’s only been two years of the “new normal!”

Is it a genocide in the making? It is a case of careless poisoning of human beings? Honestly, talking about this in a scholarly manner feels like a request to please be a good girl, take a spade, and dig out a hole in the ground that may or may not be used as our own grave. Sorry this is not normal. Not normal!

And when it comes to the likelihood of evil motives, of course the world is complex! Of course there can be many players with many motives! If you are curious, please check out deeper dives: “The Mind of a Global Owner: Does Depopulation Make Sense?” and Betrayal and Extermination of Property Owners: A Thought Experiment.

And on the final note about conspiracy theories, Igor Chudov recently wrote a fantastic article showing, side by side, the evolution of “crazy conspiracies.” I think the comparisons are potent! 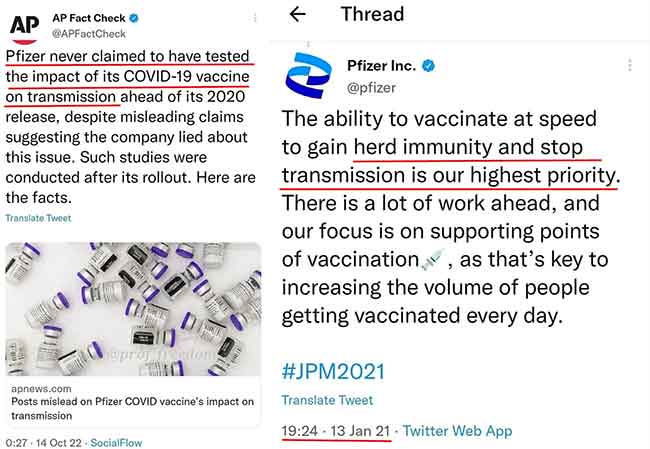 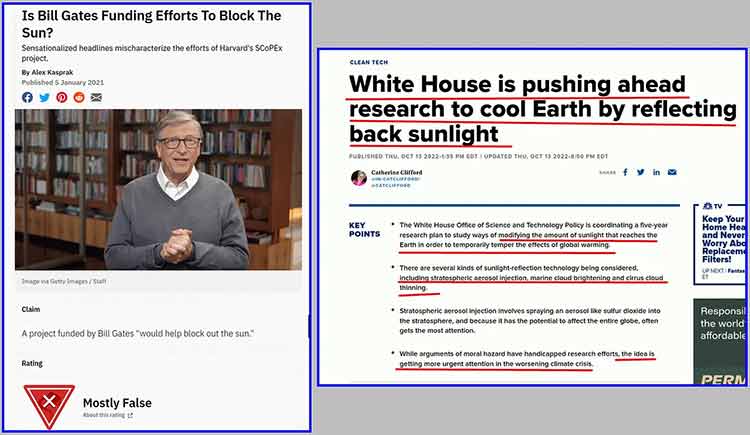 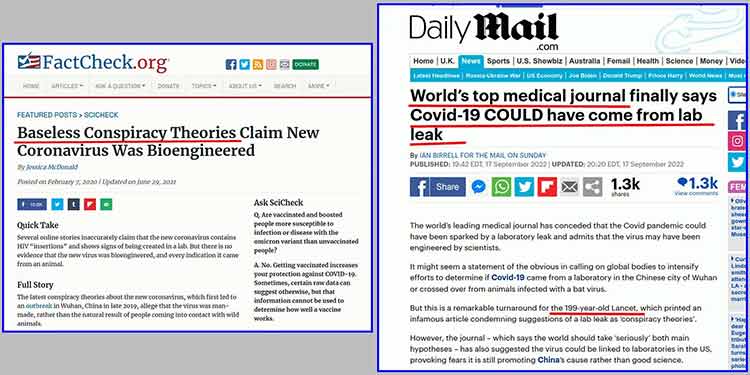 How to Handle Too Much “Crazy”?

It’s never easy. I promised to give my personal answer to coping with an onslaught of “crazy.” My personal answer is faith in the power of the universe and praying for courage, clarity, and protection. It sounds simple but it takes a lot of work to leave behind the intellectual habits of “smart, educated people” and go back the primal feeling of how people felt about the world for maybe millions of years.

When you are here, between the Earth and the sky, and you have no idea what’s ahead — but you know that you are a good person, a dignified person, that you are here for a reason, surrounded by good energy, and that you have an obligation to walk your path with dignity and self-respect, to be grateful to the higher powers for all the joyous things, and to not be afraid of anything. This is the only way I know how to do it.

May the destructive ones eat each other! May we find the sweetest way toward truth and healing — and heal completely! There will come a day, now or in a thousand years, when the cruel transhumanist crazies will be a myth, a bad dream. It’ll come. And our descendants will thank us. May we stand with courage. May it be so.

To find more of Tessa Lena’s work, be sure to check out her bio, Tessa Fights Robots.