Were Ghislaine Maxwell and “A-17” the Real Reasons for the FBI Raid on Mar-a-Lago?

This may be the most off-the-wall conspiracy theory I've researched in a long time. But so far, I see nothing to dissuade me from believing it's possible. In fact, a lot of it makes sense.

What was the FBI after? It seems based on the way the raid on Mar-a-Lago went down that they weren’t just trying to pin a general charge on a president taking classified documents, especially considering it was within his rights to do so as the ultimate arbiter of what is classified and what is not. Were Deep Staters who command the FBI after something specific?

During Ghislaine Maxwell’s first interview after being arrested and put in solitary confinement awaiting trial, she made some very peculiar statements. They were so off-the-wall that they were certain to be included in any post-interview write-ups. Here’s what she said:

‘Mysterious’ events have led her to create an imaginary cellmate, despite the fact she has been in solitary confinement from the start, with a light being shone into her cell every 15 minutes to ensure she has not self-harmed.

‘Strange things happen. The toilet flushes, the shower turns on when no one is nearby. When it happens, it alarms the guards so I created a ‘cellmate’ called A-17 so when something strange happens I blame it on A-17.’

We have a new favorite long-term storage food recommendation. Use discount code “JDR” at Heaven’s Harvest for food that is nutritious and actually tastes good! You’d be surprised how many long-term food companies sell “food” that really isn’t all that edible.

Who would call an imaginary cellmate “A-17”? Some at the time speculated that the placement of the odd phrase was intended to send a message to the outside world, perhaps the powers-that-be who she wanted to alert. The message could have been that she is aware of what’s in “A-17” and that’s why they need to keep her alive.

For months, it’s been a mystery what the term means. But after a list of contents taken from Mar-a-Lago by the FBI was released, there it was. Item 12 was “Box labeled A-17.” 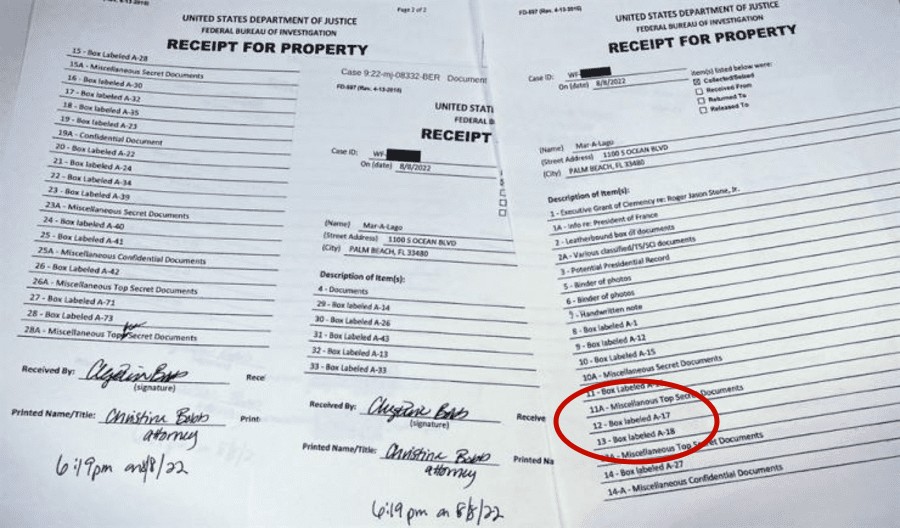 Is it possible that among the documents taken by Donald Trump when leaving the White House was some or all of the dirt Jeffrey Epstein and Ghislaine Maxwell collected over the decades? We know with a high level of confidence that Epstein had ties with the CIA and Maxwell had ties to Mossad. Some have assumed they were working for the intelligence agencies to collect the dirt. It makes sense.

It also makes sense that if they did, it would be something Trump would want to take with him.

“Since all MyPillow promo codes offer the same discounts, you should use one from a site that truly appreciates you… like mine! Use promo code ‘JDR‘ at checkout or call 800-862-0382.” — JD Rucker

During today’s episode of The JD Rucker Show (the isolated segment on A-17 and Maxwell is here), the comments that I read afterwards for the segment regarding Ghislaine Maxwell reminded me that some Trump supporters are unwilling to accept the possibility that Donald Trump can do anything wrong, ever. They lambasted me for insinuating that Trump had access to the Epstein-Maxwell client list and didn’t share it with the world.

Let’s get real. As a supporter of Donald Trump, I appreciate his policies, style, and strength of leadership. But I’m not under any illusion that he is a squeaky clean righteous warrior who would never use curse words and who reads his Bible every night. The Epstein-Maxwell list in the hands of powerful men means they have power over other powerful men. I would see someone like Trump keeping the existence of the list under wraps, justifying it by knowing he could do more with control over powerful men than by exposing them for the sake of public lambasting since few if any of them would ever be held accountable in a court of law.

Imagine if Trump had dirt on Bill Clinton, Bill Gates, and any of the other infamous members of Jeffrey Epstein’s island getaway club. Would he or most people reveal it to destroy them or use the dirt to control them?

To be clear, I think the chances of this theory being accurate is probably between 5%-10%. It’s very unlikely, but it’s interesting enough to take note and to speculate about if it is, indeed, what the FBI was after all along. The one circumstantial piece of evidence that makes me believe it could be true is the fact the raid made no sense based on what we’ve been told. If they simply wanted to bust him with documents that he wasn’t supposed to have, they could have easily just isolated the warrant to the storage room where they knew the documents were kept. The fact that they stuck their necks out so far in light of all the negative attention they knew they’d get tells me they were looking for something very specific, and this could be it.

Let’s also consider what sort of documents Trump or any president would take with them after they left office. They would take documents they could use, so anything that was truly national-security-related would almost certainly never be taken. Knowing Trump had intentions of returning to the White House, it seems plausible that he would take documents to help him that included dirt on Democrats, the Deep State, and powerful people. If the White House had some or all of Epstein’s and Maxwell’s dirt, that seems to be one of the things that Trump would want to take as a very useful souvenir.

It’s all speculation, but nothing that we know now disproves it. Therefore, it’s possible, and if we’ve learned anything over the last couple of years it’s that crazy things that are possible have suddenly become likely.