The portion of the U.S. population fully vaccinated against COVID-19 rose from 0 percent at the outset of 2021 to 63 percent by the end of the year. Yet, the CDC recently estimated that average U.S. life expectancy fell by 0.9 years in 2021. This is in addition to a 1.8 year decline in 2020—and contrary to predictions that COVID vaccines could reverse this carnage.

Nevertheless, a New York Times article by Roni Caryn Rabin blames this “historic setback” mainly on a lack of COVID-19 vaccination and not enough “behavioral measures to prevent infections, such as wearing masks,” especially among “white populations.” Her supposed evidence of this is the following claims from Dr. Steven Woolf, director emeritus of the Center on Society and Health at Virginia Commonwealth University:

“While other high-income countries were also hard hit in 2020, the first year of the pandemic, most had begun to recover by last year, he said. …

“Those countries had more successful vaccination campaigns and populations that were more willing to take behavioral measures to prevent infections, such as wearing masks, he said, adding: ‘The U.S. is clearly an outlier. …

“‘The white population did worse in 2021 than communities of color, besides Native American and Alaska Natives,’ Dr. Woolf said. ‘I think that’s very telling: It reflects the greater efforts by Black and Hispanics to get vaccinated, to wear masks and take other measures to protect themselves, and the greater tendency in white populations to push back on those behaviors.’”

Other than the United States being an outlier when it comes to falling life expectancy in 2021, the rest of those claims are demonstrably false.

First, a greater portion of the U.S. population was fully vaccinated against COVID-19 than the European population throughout all of 2021. Even when limited to members of the European Union, the United States had a significantly higher rate of vaccination for the bulk of the year: 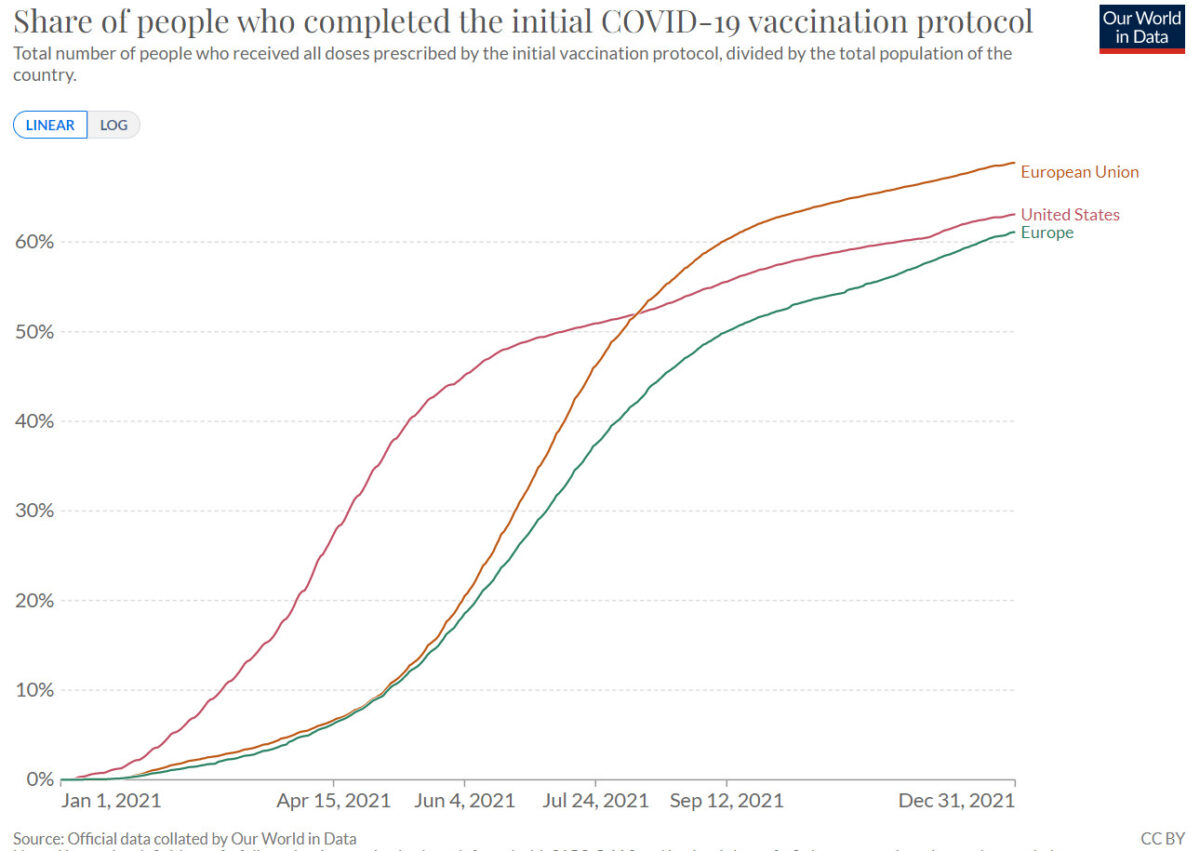 Second, whites had equivalent or higher COVID-19 vaccination rates than blacks and Hispanics throughout 2021:

Third, masking was less common in certain segments of Europe during 2021 than the United States. For example:

Moreover, a study conducted with data from 35 European countries during the winter of 2020–21 found a “moderate positive correlation between mask usage and deaths in Western Europe,” suggesting that “the universal use of masks may have had harmful unintended consequences.”

Finally and most importantly, the strident assertions of the Times and Woolf are based on the childish notion that correlation proves causation, a fallacy that high schoolers are taught to avoid. That’s because a correlation can be a mere coincidence or caused by numerous other factors. Worse still, their correlations are erroneous.

Just Facts asked Woolf if the Times accurately reported his words, and he replied:

“When reporters ask me to explain why the US losses were so large, my custom is to say that more research is needed to definitively answer the question and to mention a range of potential contributing factors. Among them is how people responded to vaccination and pandemic control measures, but I usually mention a number of other factors and in all cases (try to) use conditional language such as ‘may have.’”

Just Facts then asked Woolf if he planned to ask the Times for a correction, and he didn’t reply.

In June 2021, NPR reported on a study from Woolf and company about the life expectancy decline in 2020 and asked him, “So, what’s the prognosis going forward in the United States?” Woolf replied, “I think life expectancy will rebound.”

Given his focus on vaccines and masks, Woolf’s failed prediction was likely based in part or whole on his observations of vaccine uptake and mask usage in 2021. Now that these measures failed to work or overcome other factors which may have driven down life expectancy, Woolf and the Times are calling for more of the same.

Randomized controlled trials are the only sure way to determine the effects of medical interventions. These are gold standard studies in which people are randomly assigned to receive or not receive a certain treatment.

Several such studies have been conducted on COVID mRNA vaccines and on cloth/surgical masks—and none of them found that these measures save more lives than they take. Concerningly, the authors of one of these studies won’t reveal data that speaks directly to this matter.