The Economic Meltdown Has Roots in Lockdown

by Jeffrey A. Tucker
in Cross-Posted, Opinions

American’s capacity for denial is truly a thing to behold. For at least 27 months, it should have been obvious that we were headed for a grave crisis. Not only that: the crisis was already here in March 2020.

For weird reasons, some people, many people, imagined that governments could just shut down an economy and turn it back on without consequence. And yet here we are.

Historians of the future, if there are any intelligent ones among them, will surely be aghast at our astounding ignorance. Congress enacted decades of spending in just two years and figured it would be fine. The printing presses at the Fed ran at full tilt. No one cared to do anything about the trade snarls or supply-chain breakages. And here we are.

Our elites had two years to fix this unfolding disaster. They did nothing. Now we face terrible, grim, grueling, exploitative inflation, at the same time we are plunging into recession again, and people sit around wondering what the heck happened.

I will tell you what happened: the ruling class destroyed the world we knew. It happened right before our eyes. And here we are.

Last week, the stock market reeled on the news that the European Central Bank will attempt to do something about the inflation wrecking markets. So of course the financial markets panicked like an addict who can’t find his next hit of heroin. This week already began with more of the same, for fear that the Fed will be forced to rein in its easy-money policy event further. Maybe, maybe not; but recession appears impending regardless.

The bad news is everywhere. Even in the midst of very tight labor markets and very low unemployment (mostly mythical when you consider labor force participation), companies have started to lay off workers. Why? To prepare for recession and the prospect of more economic chaos ahead.

High-flying tech giants are curbing their enthusiasm too. Facebook apparently got tricked into paying bigtime news outlets to let FB users have free access to articles — no doubt to those that reinforced government propaganda, since Mark Zuckerberg volunteered his entire company to be messengers for the regime back in 2020. FB got robbed and is now rethinking. No more freebies.

This might as well be the theme of American life. No more charity. No more kindness. No more doing something for nothing. In inflationary times, everyone becomes more grasping. Morality takes a back seat and generosity is no more. It’s every man for himself. This can only get more brutal.

But let’s say we stack the data at two years rather than one year. What does it look like? It comes in at 13.6%. We have never seen anything like that. And it is truly starting to hurt as never before. Gas is above $5 and rents are more than $2,000 a month on average. The raises at work have stopped coming too. On the contrary, employers are expecting more productivity for ever less money in real terms.

Prices have a very long way to go to wash out the paper sloshing around the world economy. Here is the wave of printing compared with current price trends. No way is this getting better before it gets much worse.

Put it all together, especially with declining financials, along with supply-chain breakages and other economic dislocations, and this is why it feels like the walls are closing in. It’s because they are. And there truly is no way out for anyone at this point.

No one should be shocked by any of this. It was all in the cards, an outcome guaranteed by ghastly policy over two presidential administrations, all enacted by a government that knows nothing about economics and cares nothing for basic commercial and human rights. You dispense with these things and you court disaster.

And this is how you get the worst consumer confidence rating ever recorded. 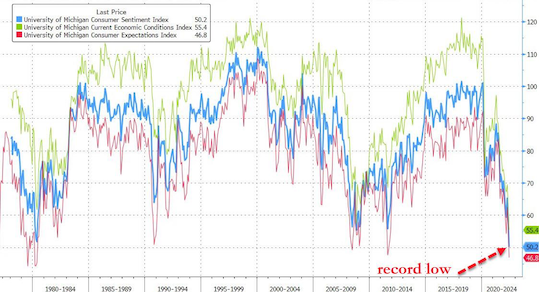 What makes today different from the 1970s is the pace at which this has all unfolded. Even a year ago, administration officials were claiming that everything would be just fine. Many people believed them, despite every bit of data pointing to exactly the opposite. Truly it feels like our lords and masters believe that their fantasies are more reality than reality itself. They say it and it somehow becomes true.

Can you imagine that only last month, the Biden administration concocted the idea of establishing a “Disinformation Governance Board”? It was designed to script the truth to all social media and mainstream media outlets, censoring all dissent. The plan blew up only because it was too overtly Orwellian for public consumption. What matters here is the intent, which is nothing short of totalitarian.

Politics is good fun for many people, a real sport and a good distraction from real life. But politics becomes a very serious business once personal finance makes the good life ever less viable. Right now everyone is searching for someone to blame and most people have hit on the old guy in the White House, who they somehow believe should do something about all these problems despite a lifelong career of knowing nothing and doing nothing about anything.

What an astounding thing to see unfold before our eyes, and so quickly! The “malaise” of 1979 was a long time coming but the meltdown of 2022 has hit many people like a hurricane that somehow evaded detection from the radar. And yet it might be far from over.

In 2020 and following, money appeared like magic in bank accounts all over the country. A third of the workforce had gotten used to languishing at home, pretending to work. Students started Zooming instead of learning. Adults who had spent a lifetime embracing the normal disutilities of labor gained for the first time a vision of a life of luxury without work.

One result was a huge boom in personal savings, if only for a brief time. Some of the money was spent on Amazon, streaming services, and food delivery but also much of it landed in bank accounts as people started saving money as never before, most likely because the opportunities to spend on entertainment and travel dried up. Personal savings soared to over 30 percent. It felt like we were all rich!

That feeling could not last. Once the economy opened up again, and people were ready to get out and spend their new riches, a strange new reality presented itself. The money they thought they had was worth far less. Also there were strange shortages in goods they once took for granted. Their new riches turned into vapor in a matter of months, with each month worse than the previous month.

Everyone has a MyPillow and MyStore promo code and they all offer the same discounts. Support Mike Lindell AND an America First news outlets that does NOT bow to Google ad dollars. Use promo code “JDR” or call 800-862-0382.

As a result, people had to deplete their savings and turn to debt finance just to keep up with the decline in purchasing power, even as their income in real terms turned dramatically south. In other words, government took away what it gave. 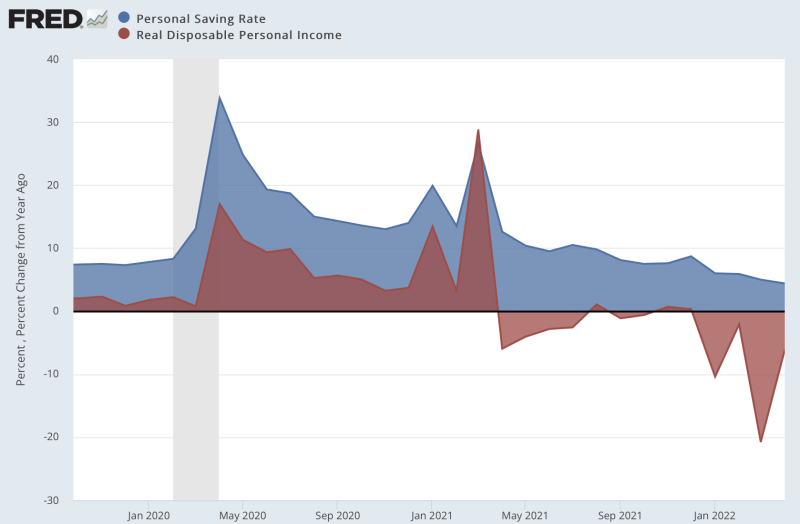 The long period of denial seems suddenly over. People of all political persuasions are fuming in anger. The crime everywhere these days is not incidental or accidental. It is a mark of civilizational decline. Something has to give and will give at some point. The ruling class in this country and their friends around the world have caused tremendous wreckage.

Here is the purchasing power of the dollar since 2018. Behold what our rulers have done!

And yet, what do our rulers have to say to us? They tell us to rely more on wind and sun — Janet Yellen’s exact words to the Senate last week. I used to think she was a smart cookie but I guess power turns even good minds to mush. Mush is exactly what they have created out of a once prosperous and hopeful nation.

The most frustrating aspect of all of us is the rampant failure to connect cause and effect. The cause should be clear: this was all kicked off by the most egregious, arrogant, irresponsible, foodhardy, and brutal policies ever perpetrated on the whole of American life, all in the name of disease control. I’ve yet to see evidence that any of the people and agencies who did this to us are willing to reassess their decisions. Quite the contrary.

There must be a reckoning. It was not the poor, the working classes, or the person on the street who did this. These policies were not an act of nature. They were never even voted upon by legislatures. They were imposed by men and women with unchecked administrative power under the mistaken belief that they had it all under control. They never did and they do not now.

Jeffrey A. Tucker is Founder and President of the Brownstone Institute and the author of many thousands of articles in the scholarly and popular press and ten books in 5 languages, most recently Liberty or Lockdown. He is also the editor of The Best of Mises. He writes a daily column on economics at The Epoch Times, and speaks widely on topics of economics, technology, social philosophy, and culture.

Flashback: Former AG Barr Shut Down Investigations into a Trailer Load of 288,000 Ballots into PA from New York in 2020 Election