by Cindy Harper
in Cross-Posted, News

Pennsylvania Governor Tom Wolf has shared an infographic showing how US citizens posting photos of guns on social media, along with “cryptic messages,” could lead to a court confiscating their guns under proposed legislation that he supports. 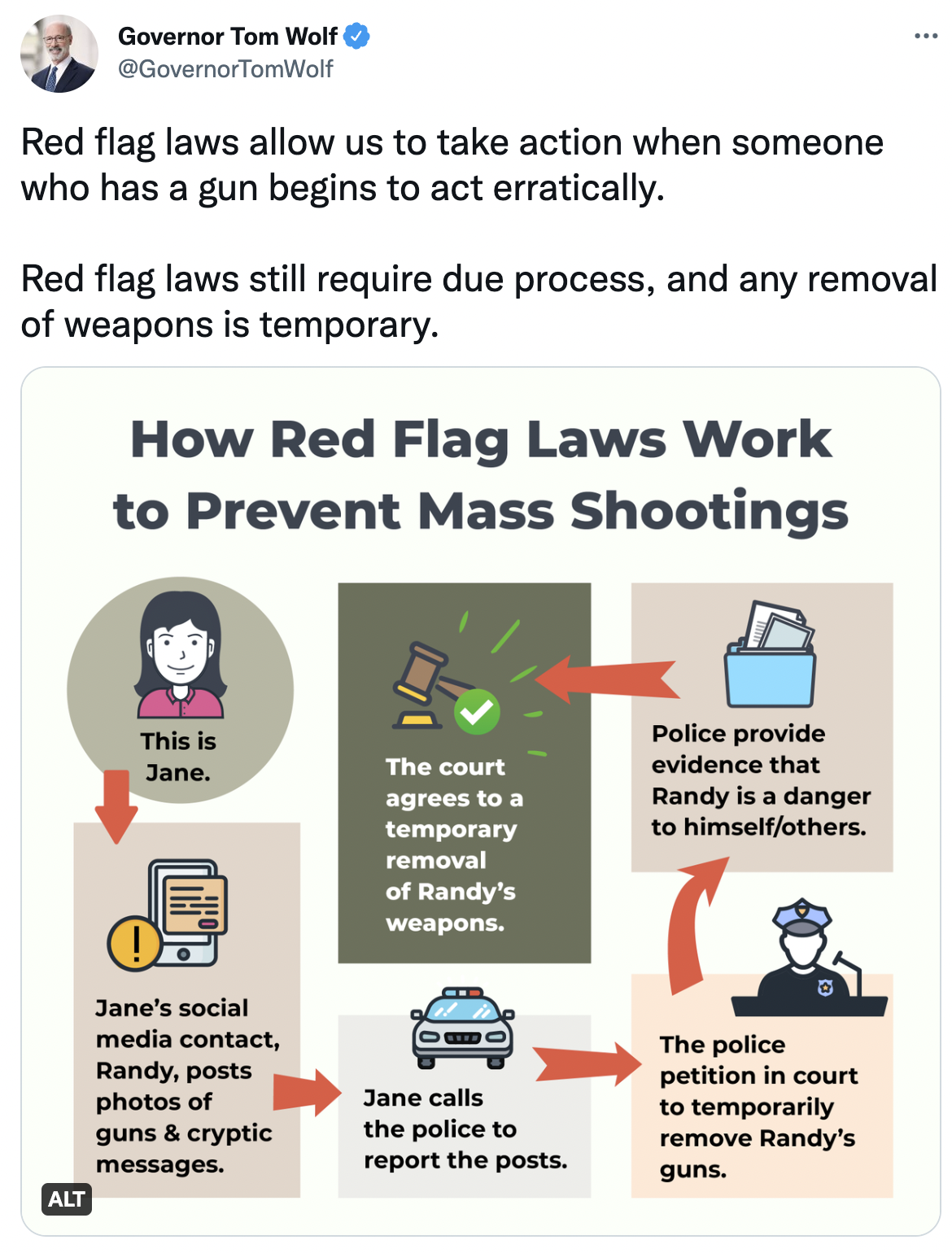 Governor Wolf rebuked Republicans in the House Judiciary Committee for refusing to approve what he called “commonsense” bills addressing gun violence in the state.

Instead of voting to move the four bills to the House for debate, Republicans on the Judiciary committee forced a vote to refer the bills to another committee.

“Shameful. That’s what I’d call today’s action – or, rather, inaction,” Governor Wolf said. “Lawmakers have an opportunity to take commonsense steps, which the majority of Pennsylvanians support. Instead of taking a vote to advance these bills, they are just delaying debate on this legislation. Gun violence won’t delay. Every day the Republicans stall, more people are at risk.

“This isn’t just a ‘Philadelphia’ issue. This is a statewide and national issue that must be addressed. It’s reprehensible that Republicans continue to stall when our own constituents want this addressed right now,” Governor Wolf said. “I urge Republicans to stop these tactics and take action.”

Last week, Governor Wolf sent a letter to the members of the committee calling on them to approve the four bills as they are.

“I have committed to doing everything I can to bring peace to our communities, but ultimately, sensible gun laws save lives, and the General Assembly must act to make statutory changes,” Governor Wolf said. “Communities across the commonwealth – urban, suburban and rural – have experienced the horror of gun violence. We must do our part to prevent these tragedies.”

The letter also alleged that the bills are not meant to take guns away from law-abiding citizens but doesn’t touch on how a social media post with photos of guns could be illegal.

“If the aforementioned bills became law, they would not infringe upon the rights of law-abiding gun owners. This is not about taking guns away from those who lawfully own and operate them, it’s about ensuring guns are appropriately locked up and kept out of the hands of those who are more apt to cause harm.”

The governor concluded: “We can no longer afford to do nothing. Every day that we delay, lives are on the line. Pennsylvanians are counting on you.”

Image by Tom Wolf via Flickr, CC BY 2.0. Article cross-posted from Reclaim The Net.

Iran's Nuclear Program: Where Is the Biden Administration's Plan B?