Should You Raise Chickens?

That’s it. That’s the article. Well, it could be, because IF you have the means and IF you have the space and IF you’re physically capable of raising chickens, then you definitely should consider buying and raising them. I was saying this before eggs became so expensive in the United States that people started smuggling them from Mexican supermarkets. Now, it’s really a no-brainer. Here are three reasons why…

For a long time I didn’t really buy into the notion that fresh eggs were any better than store-bought eggs. Then, I tried some. My aunt raises chickens as does my wife’s sister. Both of us had separate opportunities to try actual “farm fresh” eggs that were laid within 24 hours of us eating them by chickens who were raised in backyards. Don’t let anyone tell you they are no different from grocery store eggs. It’s not even really a comparison. Then, there are the health benefits which I’ll leave for you to research, but I’ve heard farm fresh eggs are simply more nutritious.

Cheaper in the Long Term

Chickens are actually pretty cheap to buy. Building or buying a chicken coop can cost anywhere from a couple hundred dollars up to however much you want to spend on them. The feed and other regular expenses are rising, though they’re not terribly expensive just yet. Compare that to the price of eggs and suddenly it’s clear how around one egg per chicken per day can add up in the long-term to tremendous savings.

Let’s call it what how we see it. The powers-that-be are in the process of eliminating and eventually outlawing natural forms of protein that aren’t insects. They want us eventually eating lab-grown meats or cricketburgers as our primary source of protein, and by “eventually” I hope everyone understands we’re talking about months or years, not decades.

Chickens properly raised and cared for can produce anywhere from three or four eggs per week to an egg per day each. That’s 5-8 grams of protein, not to mention other crucial nutrients, produced per chicken per day. Combine that with a freeze-dried protein bucket (promo code “prep2023” for 10% off or “prep2030” for 15% off orders over $777) and you’ll have a long-term supply of real protein from real animals instead of relying on the government’s mealworm lines.

If you’re thinking about buying and raising chickens, you’re not alone. According to the article below by Tyler Durden over at Zero Hedge, people are becoming more and more interested in the idea…

Covid supply chain snarls turned millions of Americans into “preppers” overnight. The run on toilet paper, food, guns, ammunition, and other essential items for survival pushed millions to consider preparedness for a crisis.

Remember all those old-school preppers? The media used to refer to them as “extreme” and even called them “tin-foil hat conspiracy” folks, but during the shutdowns, those folks were right, and the mainstream media got it wrong.

The next shortage underway is eggs. Readers have seen our notes on supermarkets nationwide running out of eggs. The egg shortage is so severe that last week the US Customs and Border Protection reported that egg smuggling from Mexico erupted.

US egg prices have topped the national average gasoline per gallon price at the pump. 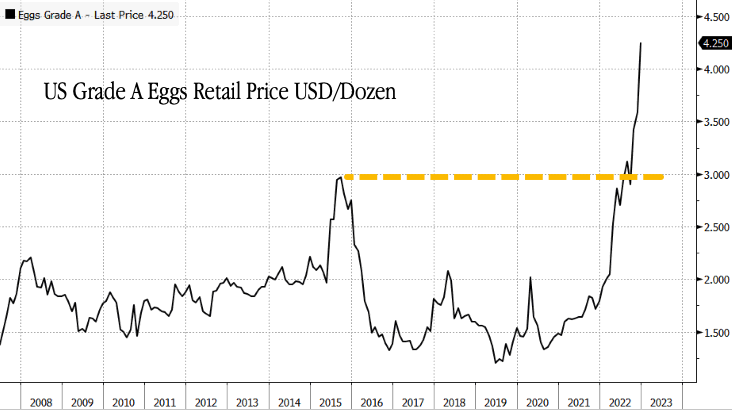 As a result of the egg crisis, internet search trends on Google show Americans are panic searching where to find egg-laying hens for their backyard.

The search trend “where to buy chickens near me” erupted to a near multi-decade high. 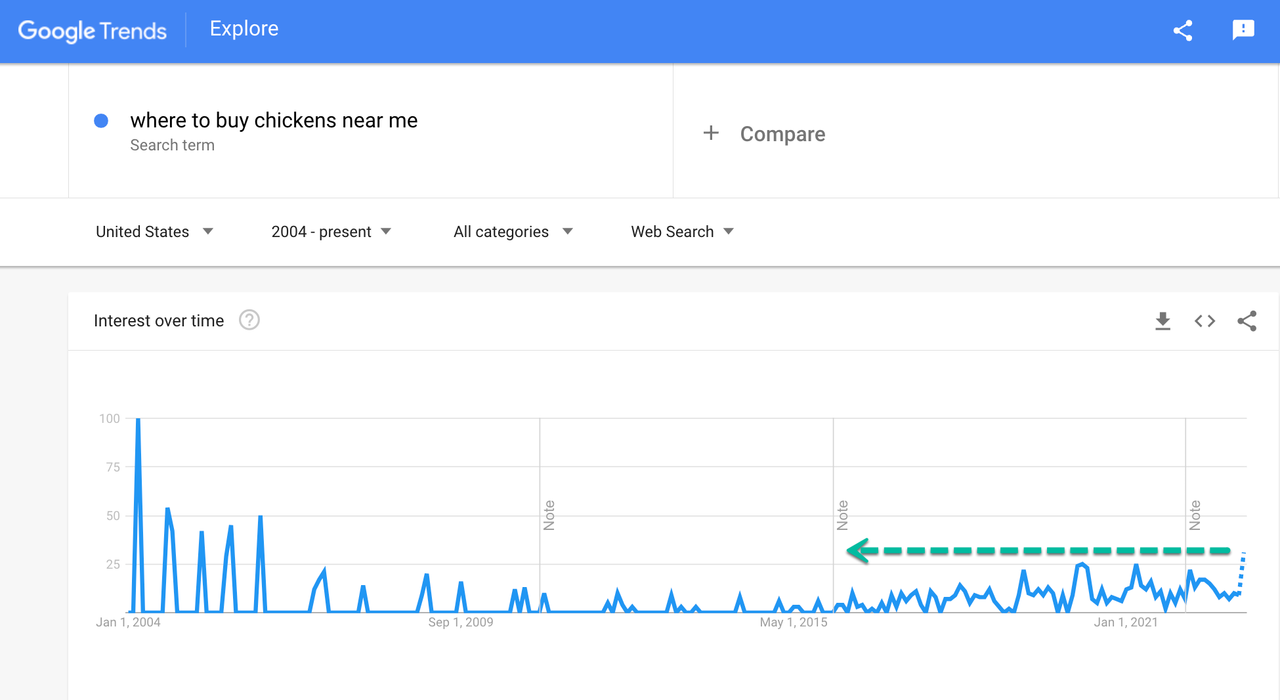 “Buy chickens near me” searches explode across the US. 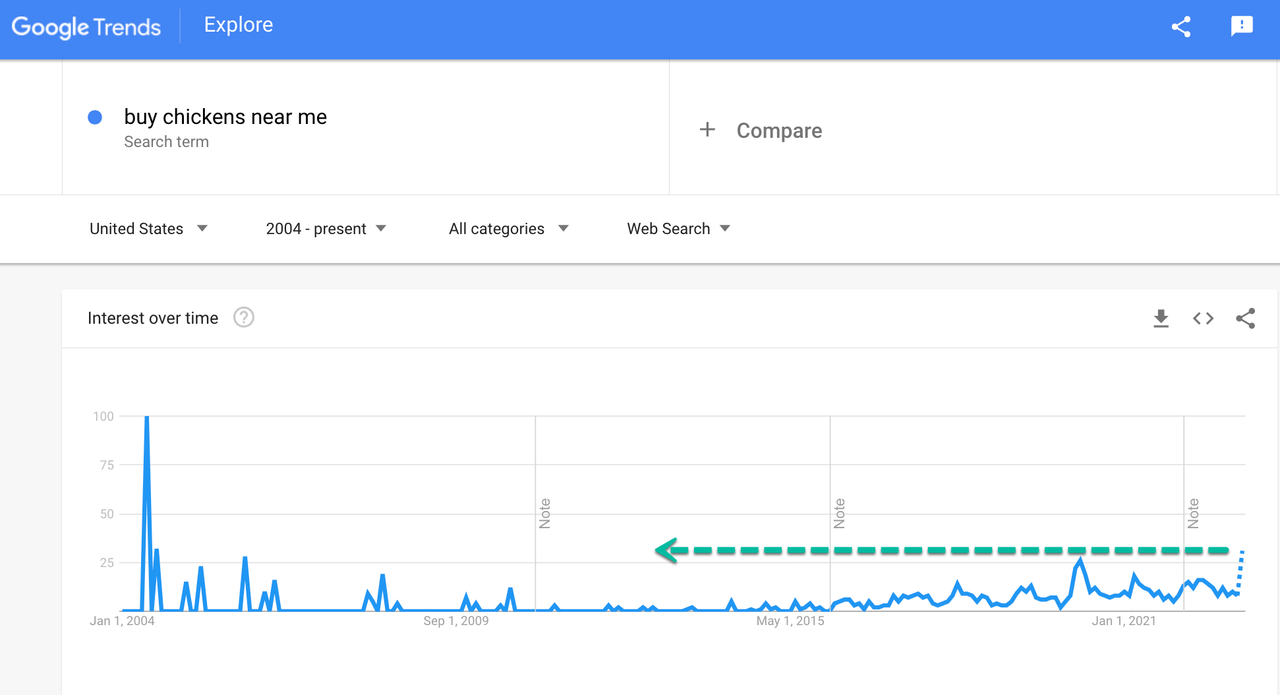 Besides the Covid spike, “how to raise chickens” has spiked to levels not seen in a decade. 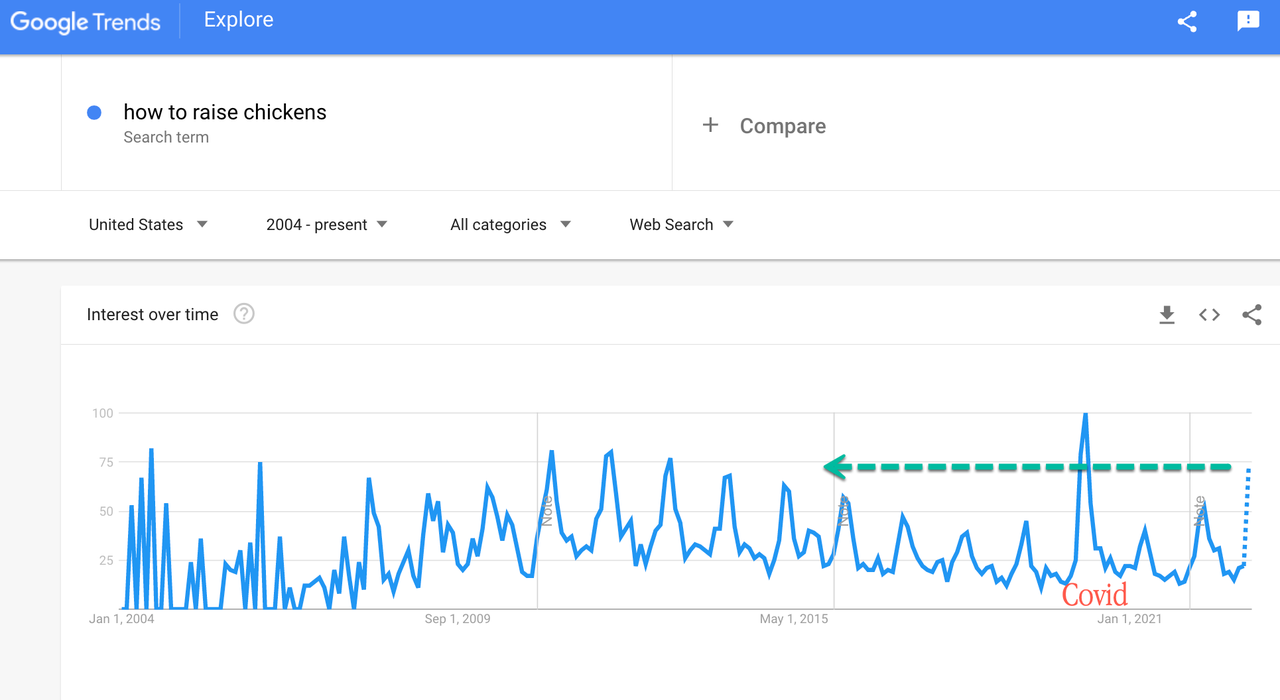 Over the last several years, food insecurity has pushed many Americans to create ‘little backyard farms’- something their parents or grandparents did more than half a century ago. Living off the land was standard decades ago, but as metropolises sprung up, people relied more on a corporation (or even the government) to provide food.

Soaring distrust in government and corporations had transformed many into preppers following the pandemic shutdowns when some supplies were impossible to find. People don’t want to be left empty-handed when the next crisis arises. This has led to a new generation of preppers and the normalization of being prepared.

Okay, so nobody brought up beef but I will. We are getting into the beef business, expanding our thriving freeze-dried chicken business to include cows. We only bought 10 cows for our initial run so it’s first come, first served. We have non-GMO cows that aren’t getting the dreaded mRNA vaccines the powers-that-be are pushing now. Grass fed, grain finished. We’ll be selling frozen steaks, ground beef, and roasts, PLUS we’ll be selling long-term storage freeze dried beef chunks. If you want to be notified when we open for orders, go to my beef page.