Russia and the WHO: Friends With Benefits

by Riley Waggaman
in Cross-Posted, Opinions

After several weeks of passive-aggressive bickering, Russia and the WHO are unfortunately still “an item” and they may even take their calamitous relationship to the next level: clot-shot certification.

Speaking at the St. Petersburg International Economic Forum on June 18, Melita Vujnovic, WHO representative to Russia, announced that negotiations between the World Health Organization and the Russian Direct Investment Fund (RDIF) concerning recognition of Sputnik V were back on track.

An inspection of manufacturing facilities in Russia could happen in the coming months, according to Vujnovic.

“Cooperation goes on despite difficult moments. The World Health Organization is a platform for multilateral cooperation on the topic of health, and our main task is to remove all barriers, all obstacles to scientific and practical cooperation,” the WHO representative said.

This is great news for RDIF, which partnered with shady pill-peddlers and AstraZeneca to make Sputnik V accessible to the whole world, and also to make mountains of rubles. There are currently 100 million doses of the safe and effective unproven genetic slurry rotting in Russian warehouses, so time is of the essence.

But as a science-backed precautionary measure, manufacturers have “extended the shelf life” of the drug. That’s directly from TASS, by the way:

But back to the Relationship Status.

A day earlier, on June 17, Vujnovich revealed that the WHO, despite earlier threats, would not be closing its office in Moscow.

“The WHO country office is here, has not gone anywhere, is not going anywhere and continues normal work,” she said.

We won’t lie: if you were expecting Russia to leave the WHO in the near future, you might have to keep waiting. You might be waiting for a very long time, actually.

On June 16, Hans Kluge, WHO regional director for Europe, participated in a SPIEF panel discussion about how to inject the masses with “next-generation” vaccines. Mikhail Murashko, Russia’s health minister and a member of the WHO’s Executive Board, was a fellow panelist.

Even Dr. Tedros made an appearance at SPIEF (via webcam) but we are saving details about this historic event for a separate blog post. 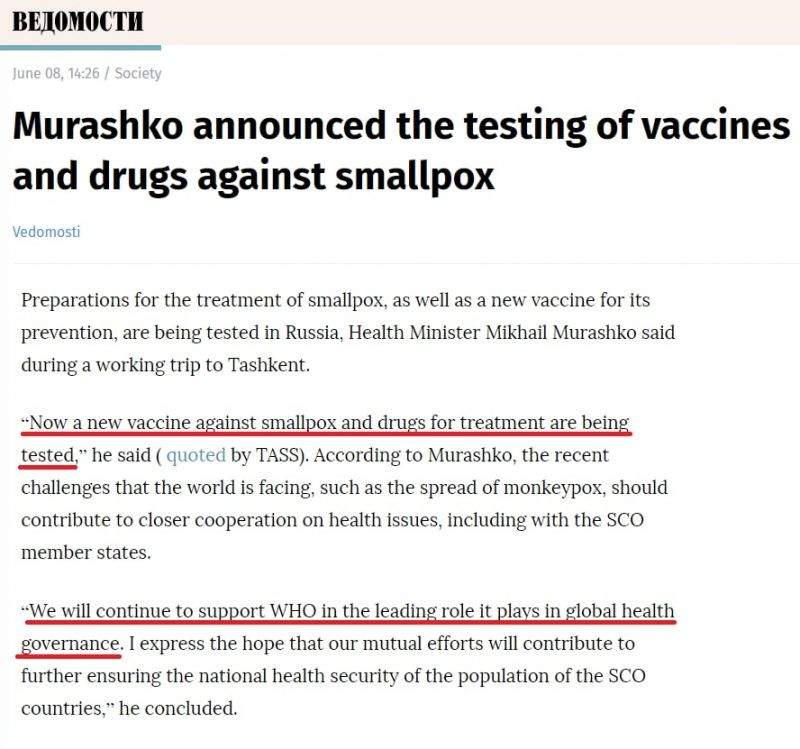 Russia’s health minister made the above statement about two weeks after the WHO passed a resolution condemning Russia for “causing a serious impediment to the health of the population of Ukraine, as well as having regional and wider than regional health impacts.”

However, there was a brief moment of sanity when Russia’s deputy minister of health, Alexandra Dronova, spoke at the 75th World Murder Assembly last month.

“We support joint work to strengthen the global health architecture. It must be based on the principles of consensus, transparency, impartiality. The development of a new WHO international pandemic response tool and making specific changes to the International Health and Sanitation Rules should not violate the sovereign right of countries to determine a set of emergency response measures and on their territory,” Dronova said during her speech.

(She also said: “The countries of the world were able to overcome the acute phase of the pandemic with a collective effort under the coordinating role of the World Health Organization.” Sigh.)

But even this pushback didn’t seem to fundamentally change anything. As Politico reported on May 28, a compromise was reached by WHO members concerning proposed changes to the IHR:

The World Health Assembly — the annual meeting of WHO member countries — adopted a U.S.-led resolution that sets the timeline for amendments to the International Health Regulations (IHR) to come into force. The resolution was nearly scuppered after several countries including the Africa group, indicated that they had reservations about it.

In general, the situation is less than stellar.