Last week, we reported on three doctors who appear to have died from adverse reactions to the Covid jabs. It appears there may be a total of six that have died.

by Brian Shilhavy
in Cross-Posted, Opinions

Editor’s Commentary: We reported on the first three known doctors to have died in the hospital system last week. Since then, three more have apparently emerged. It is extremely important to understand that sourcing this type of information is extremely challenging, so the story below has not been fully corroborated. It cannot be, not without the resources of a corporate news agency. Even then, it wouldn’t be easy because there is such a heavy shroud placed around such information.

Generally speaking, I’m not a fan of publishing uncorroborated stories. But because there is such a massive, ubiquitous coverup by Big Pharma, government, Big Tech, and corporate media regarding anything that pertains to Covid “vaccine” adverse reactions, it’s necessary to run with stories that cannot be verified. As an editor, it’s challenging, but we do what we can to make sure there are enough credible sources to justify running with stories that cannot be confirmed. With that said, here’s Brian Shilhavy from Health Impact…

The alternative media was all a buzz this week as several previously young, healthy doctors all died within just a few days of each other.

The biggest story came out of Canada’s Trillium Health Partners-Mississauga Hospital in Toronto, where 3 physicians from that hospital died “unexpectedly” within the same week, and according to a nurse who also works in the same hospital, the deaths followed after the hospital started mandating the fourth Covid shot for their employees.

Three physicians at Canada’s Trillium Health Partners-Mississauga Hospital died unexpectedly in the same week. The cause of death for the three doctors has yet to be announced.

The news about the three deceased doctors was first shared by independent journalist Monique in a post that went viral. According to Monique, a concerned nurse shared with her a copy of the memo that was sent out by the hospital’s management.

According to the nurse, the three doctors died after the hospital started mandating the fourth Covid shot for their employees.

“Three physicians at the Mississauga hospitals have died this week,” the nurse told Monique. “1st memo Monday, 2nd Tuesday, 3rd Thursday. [The] cause of death wasn’t shared in the memo, but how many times have 3 doctors died in 1 week, days after the hospital started administering the 4th shot to staff.”

The Gateway Pundit had reached out to Trillium Health Partners through their official Facebook page on July 24th to verify the deaths of the three doctors but did not respond to our inquiry.

On Wednesday, Trillium Health Partners finally released a statement and confirmed the deaths of the three physicians.

“It is with deep sadness that THP mourns the loss of three of our physicians who recently passed away,” the hospital announced on Twitter.

“Dr. Jakub Sawicki, Dr. Stephen McKenzie, and Dr. Lorne Segall were respected physicians who dedicated their lives to caring for their patients and community,” the post added.

The hospital claimed that the social media rumor that their deaths were related to the COVID-19 vaccination is “simply not true.” These deaths followed the announcement of the death of Dr. Paul Hannam, the Chief of Emergency Medicine and Program Medical Director at North York General Hospital (NYGH).

Dr. Hannam was reportedly in excellent health, as he was an Olympic sailor and marathon runner. Any links to COVID-19 vaccines he may have taken were vehemently denied by the hospital and corporate media.

Dr. Paul Hannam, the Chief of Emergency Medicine and Program Medical Director at North York General Hospital (NYGH), died unexpectedly on Saturday while out for a run, according to his colleagues.

There is currently no information available regarding the reason for his sudden death.

CAEP and the EM community are mourning the loss of Paul Hannam. We are sending condolences to his family and colleagues in Toronto. pic.twitter.com/cYJ0nhppJI

Then Dr. Candace Nayman, 27, a resident at McMaster Children Hospital in Hamilton and also a triathlete, also died “unexpectedly” this week. 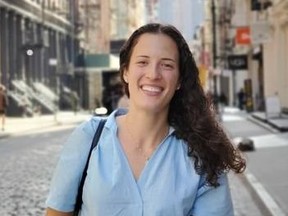 The fifth GTA doctor to die in July “radiated positivity” and “lived a vibrant and active life.”

But what the world lost in the sudden and tragic death of Dr. Candace Nayman was a woman who had dedicated her life to the health of children.

The 27-year-old, who was a resident doctor at McMaster Children Hospital in Hamilton, collapsed while swimming as she competed in a triathlon on Sunday. She subsequently died on Thursday.

“Candace was one of the best residents I have had the privilege to work with in my time at McMaster,” said Dr. Christina Grant, professor as McMaster University and McMaster Children’s Hospital.

In her tribute on the memorial page, Grant added Candace was a “critical thinker, compassionate and an excellent team player.”

Friend Rebecca Starkman added: “There are simply no words to describe the giant hole that has been left in the absence of Candace. There is nothing she set out to do in this world that she couldn’t conquer. Her amazingly gifted brain was the cause of envy for her peers. There was no contest when it came to competing with Candace. She was brilliant in so many ways. Whether it was academically, athletically, musically, etc. she thrived in all aspects of her life.” (Source.) The hospital provided no information regarding the cause of death.

According to various reports, Mazlouman was found dead at a local swimming pool in Esterhazy, Saskatchewan on Saturday.

“RCMP were called to the D.A. Mackenzie Aquatic Center around 1:30 p.m. and found the man unresponsive in the pool. He was pronounced dead at the scene by EMS,” CTV News reported. (Full Article.)

That is quite a flurry of “unexpected deaths” in the medical community in Canada, which mandates COVID-19 vaccines as a condition for employment in the medical system.

How long will the public continue to believe that these “unexpected deaths” of previously young, healthy doctors have “nothing to do with the COVID-19 vaccines”?

FBI 'Should Be Disbanded' After Interfering in 2016, 2020 Elections