Censorship is bad enough when it stifles dialogue and suppresses opposing views. It's even worse when it covers up undisputed scientific facts.

Editor’s Commentary: There’s one HUGE takeaway amongst the many major bits of information that emerged with the latest Twitter Files drop. Pfizer and Moderna were regularly suppressing anything that ran contrary to their prescribed vaccine narrative to the point that they quashed scientifically proven, fact-based statements by respected doctors and scientists. We’ve known this to some extent already based on past Twitter Files revelations, but the importance of this particular drop is in the details.

Among the various censorship requests they made were some that called on deletion of Tweets that accurately claimed the so-called “vaccines” did not offer protection against contracting Covid-19 and did not prevent infected people from spreading the disease. Those realities were already acknowledged by the World Health Organization, Centers for Disease Control and Prevention, Food and Drug Administration, as well as the Big Pharma companies themselves. For them to go after those facts so fervently tells us beyond a shadow of a doubt that Big Pharma relies on an ignorant populace. They cared only about shifting the narrative to back their lies. Moreover, they preyed on uninformed people to keep their agenda moving forward which is why suppressing facts was necessary.

On one of today’s News Clips for The JD Rucker Show, I broke down the hideous implications of this type of censorship. It’s bad enough that they were going after critics and those who were spreading debatable information, but for them to demand suppression of verified and widely accepted facts tells us they knew their narrative was false. Here’s an article by Tom Parker over at Reclaim The Net that breaks down the details of today’s drop…

Some of the content targeted by the campaign included articles that were “using the news to further prove the CDC is untrustworthy.”

Journalist Lee Fang published one of the weekly emails that Twitter received from PGP as part of the latest release of the Twitter Files — collections of internal Twitter communications that have exposed the censorship relationships Twitter had with government agencies and other powerful groups before Elon Musk took over.

The email shows Todd O’Boyle, a senior manager on Twitter’s Public Policy team, sharing “this week’s misinfo report” from PGP. The February 24, 2022 email included a list of top trends the PGP had seen during the week and two attached lists. According to Fang, one of the lists contained tweets the PGP wanted Twitter to take down and the other list contained tweets that it wanted Twitter to verify. 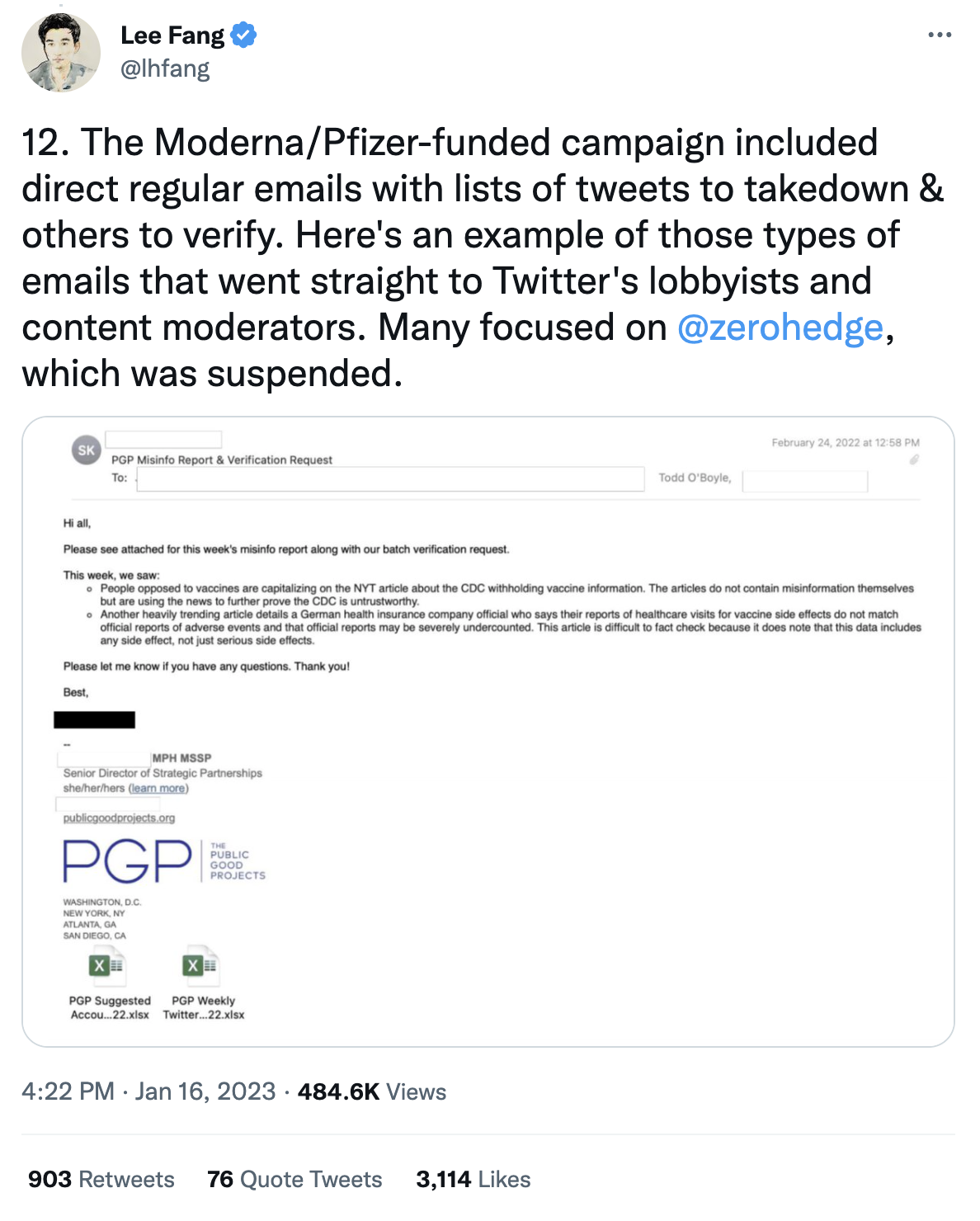 Despite flagging two trends in this weekly misinfo report, the PGP admitted that articles related to the first trend “do not contain misinformation themselves but are using the news to further prove the CDC is untrustworthy.”

The PGP also acknowledged that the second trending article it flagged, which described a German health insurance company official suggesting that reports of healthcare visits for vaccine side effects may be severely undercounted, “is difficult to fact check because it does note that this data includes any side effect, not just serious side effects.”

Fang said many of the PGP’s emails to Twitter focused on independent news outlet ZeroHedge which was banned from Twitter in January 2020 and reinstated in June 2020.

Fang also noted that this campaign flagged a tweet from senior Massachusetts Institute of Technology (MIT) scientist Stephanie Seneff that questioned vaccine passports on the basis that vaccinated and unvaccinated people have “roughly the same capacity to carry, shed and transmit the virus.” 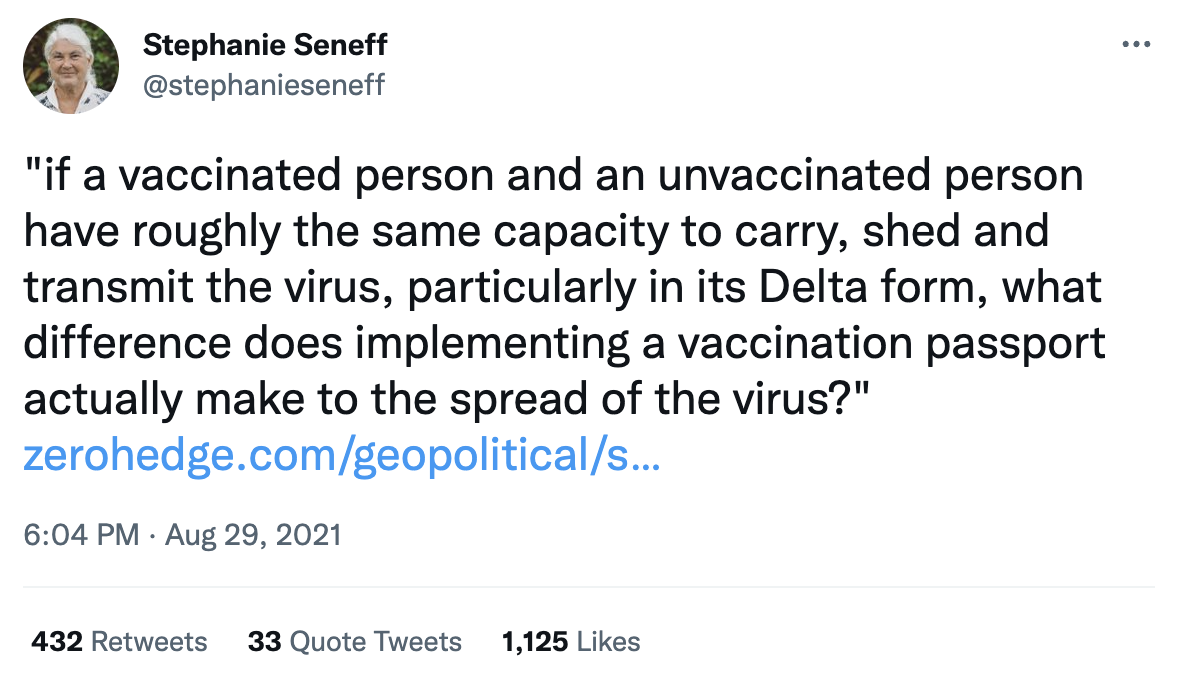 Additionally, Fang shared a screenshot of a BIO tax form that revealed part of the funding ($883,000) it provided to PGP for this campaign. 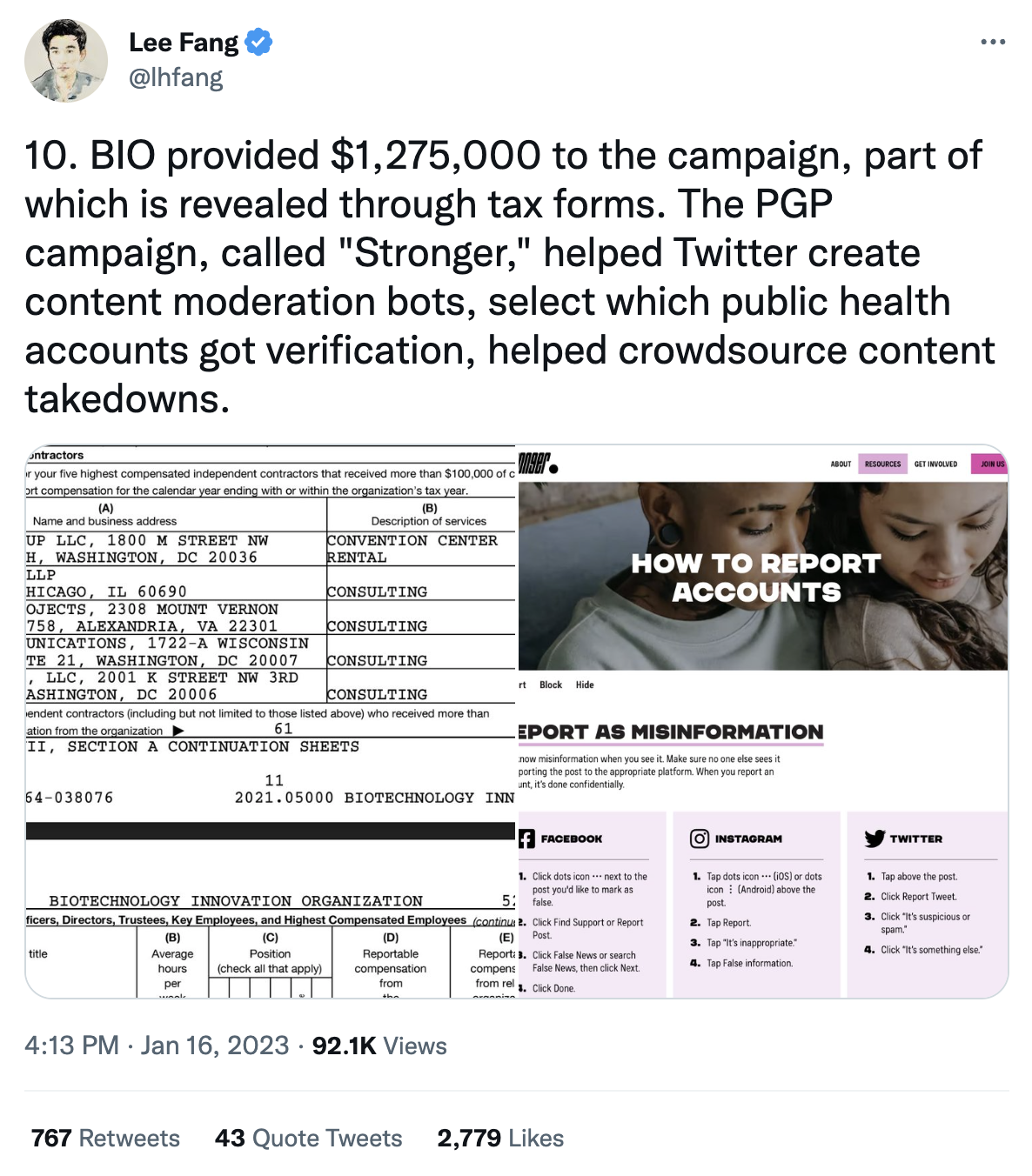 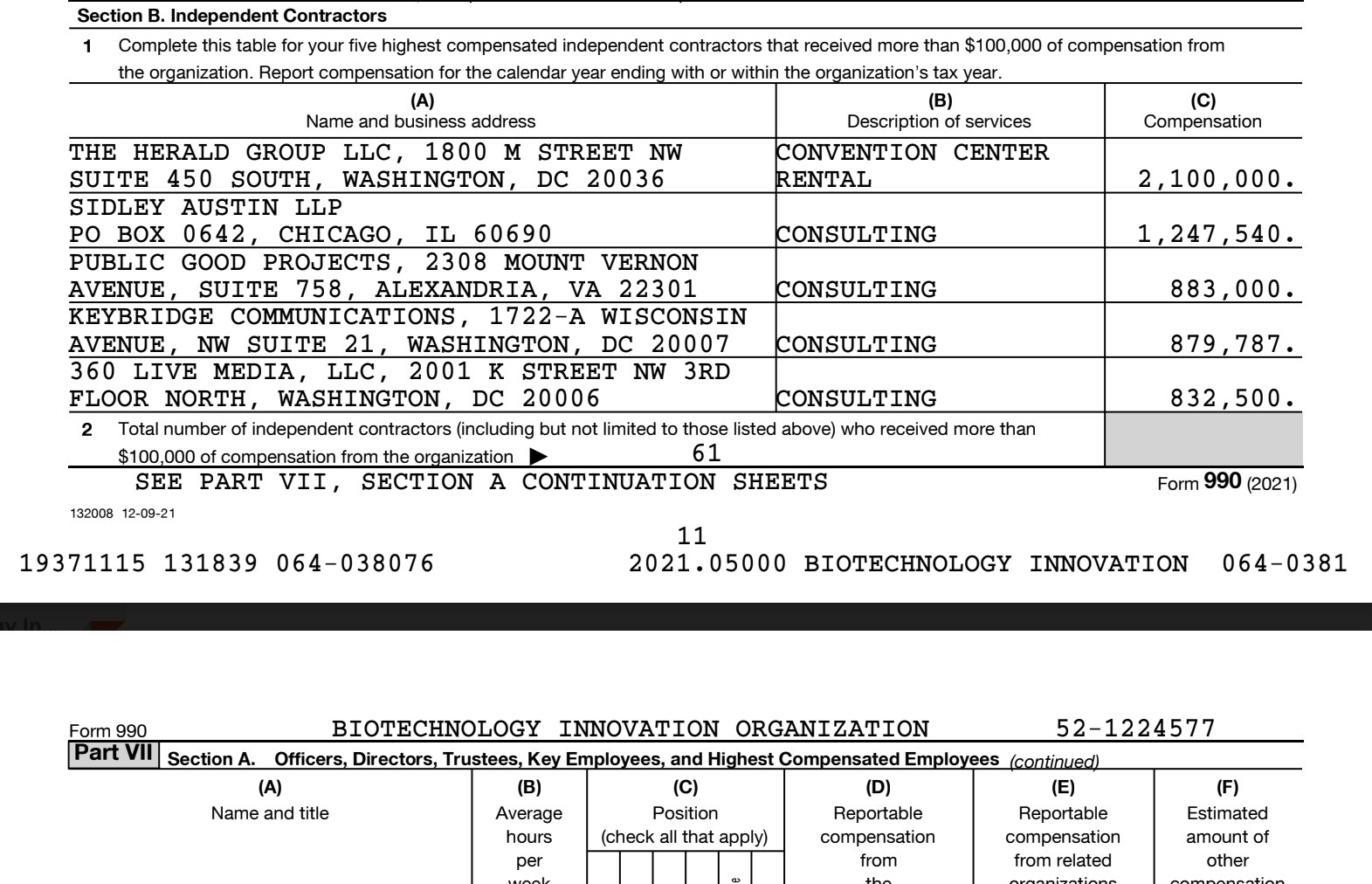 Stronger says its goal is to “stop the spread of misinformation” and its website contains a page that encourages people to flag misinformation to Twitter and other platforms. 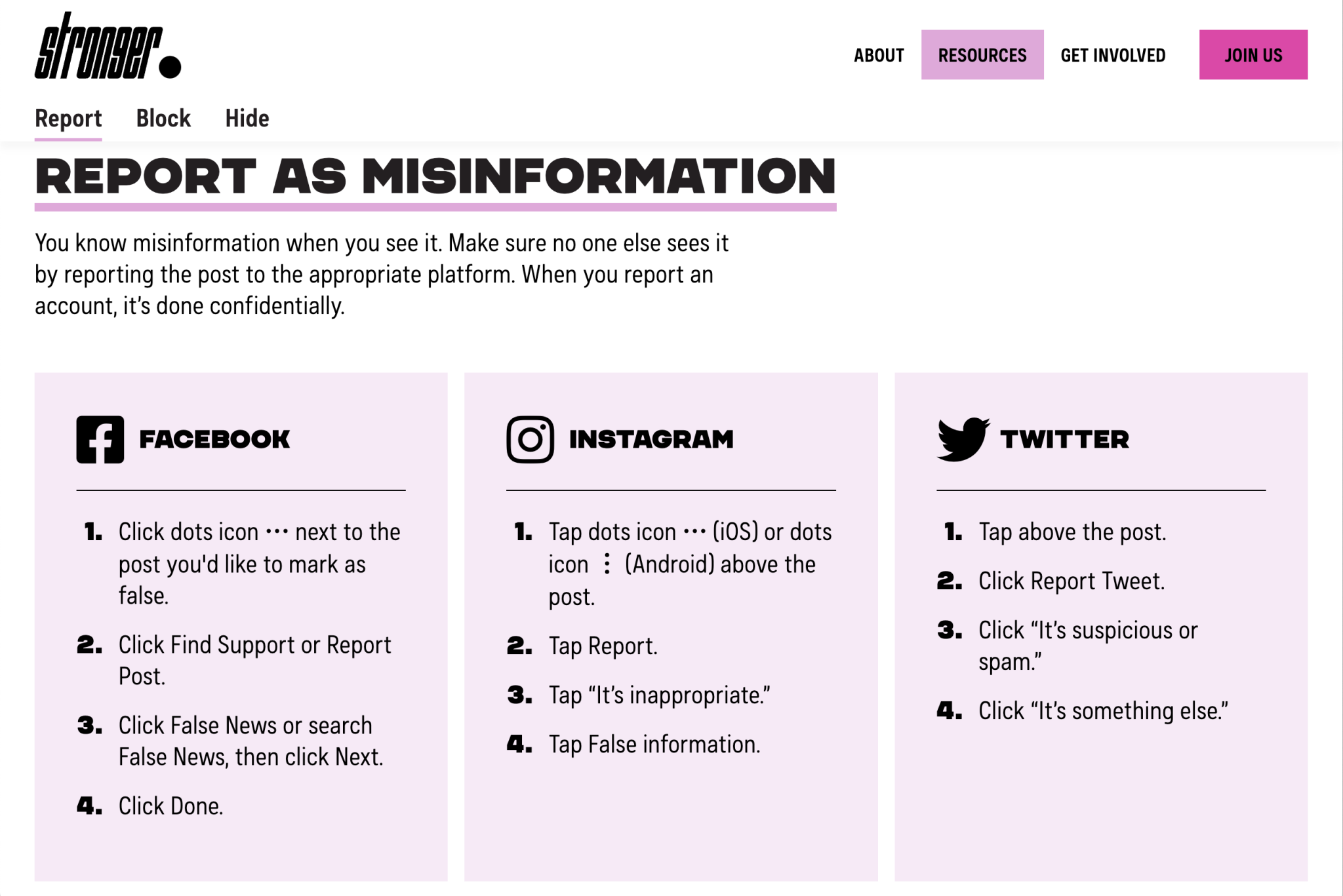 This page also contains a form for users to submit alleged misinformation to Stronger. 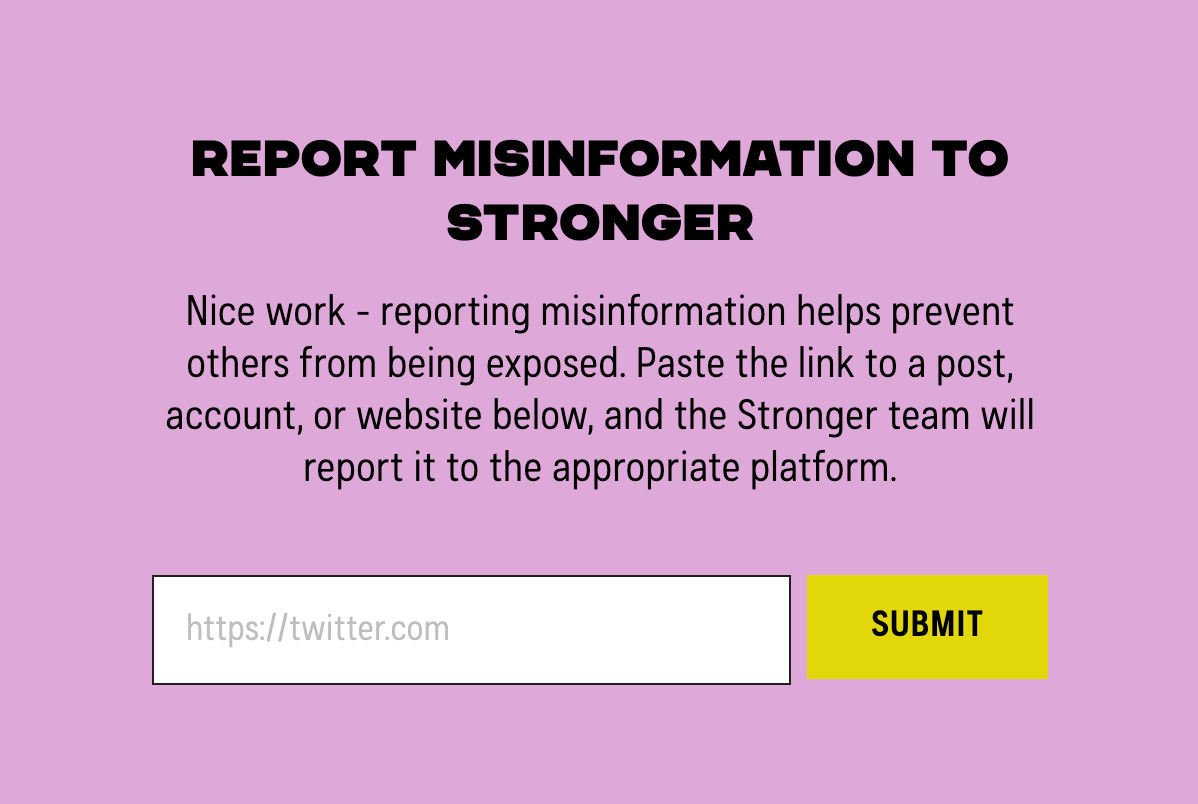 Fang’s revelations are the latest of several examples of those affiliated with Pfizer pushing for the censorship of content that questions or criticizes Covid vaccines.

Pfizer board member Scott Gottlieb complained to Twitter in August 2021 that it was promoting an article from journalist Alex Berenson. A few days after this complaint, Berenson was banned from Twitter. Twitter also censored another tweet after it was flagged by Gottlieb in August 2021.

Meanwhile, Pfizer’s CEO has branded those who share what he deems to be misinformation about vaccines as “criminals.”