The oddities in the US labor market continue.

Recall one month ago we showed that a stark divergence had opened between the Household and Establishment surveys that make up the monthly jobs report, and since March the former was sliding while the latter was rising every single month. In addition to that, full-time jobs were plunging while multiple jobholders soared near all time highs.

Fast forward to today when the inconsistencies grow and in some cases have becoming downright grotesque.

Consider the following: the closely followed establishment survey came in above expectations at 315K, yet it was well below last month’s 526K print, with June unexpectedly revised sharply lower by 105K from 398K to 293K…

… revisions which will go toward reducing the huge gap that has grown between the Household and the Establishment survey, although not nearly enough and as Academy Securities’ strategist Peter Tchir writes, “look for more revisions as last month’s surprisingly good result wasn’t revised much.” Of course, there is a problem with the above: all of these numbers are complete bullshit, and to believe them, one has to disregard and ignore the mass layoffs announced by US corporations and tracked by handy third-party websites such as Layoffs which shows that in recent months and quarter, the US has been swept by near record layoffs, on part with those observed during the peak of the covid crisis!

And speaking of the gap between the Household and Establishment survey which we have been pounding the table on in recent months, it narrowed modestly thanks to a 442K jump in the number of employed workers (tracked by the Household survey) offsetting a more modest increase in employment, which rose 315K (tracked by Establishment survey). And while the rebound in the Household was long overdue, there is a long way to go as the following chart shows, demonstrating that the gap that opened in March has since grown to a whopping 1.6 million “workers” which may or may not exist anywhere besides the spreadsheet model of some BLS political activist.

Of course, there is a reason why the Household survey would want to take its time in catching up to the establishment survey: since the direct variable in the red line above is the number of employed workers, which in turn drive the number of unemployed workers and thus, the unemployment rate (as a function of the civilian labor force), any overly aggressive increases here will lead to a disproportionate increase in the unemployment rate. So Biden’s apparatchiks have to pick their poison.

But wait, there’s more because digging deeper, we find that the latest (overdue) jump in Household Survey employment was entirely the result of rising part-time jobs, which surged by 413K in August, while full-time jobs declined by 242K. 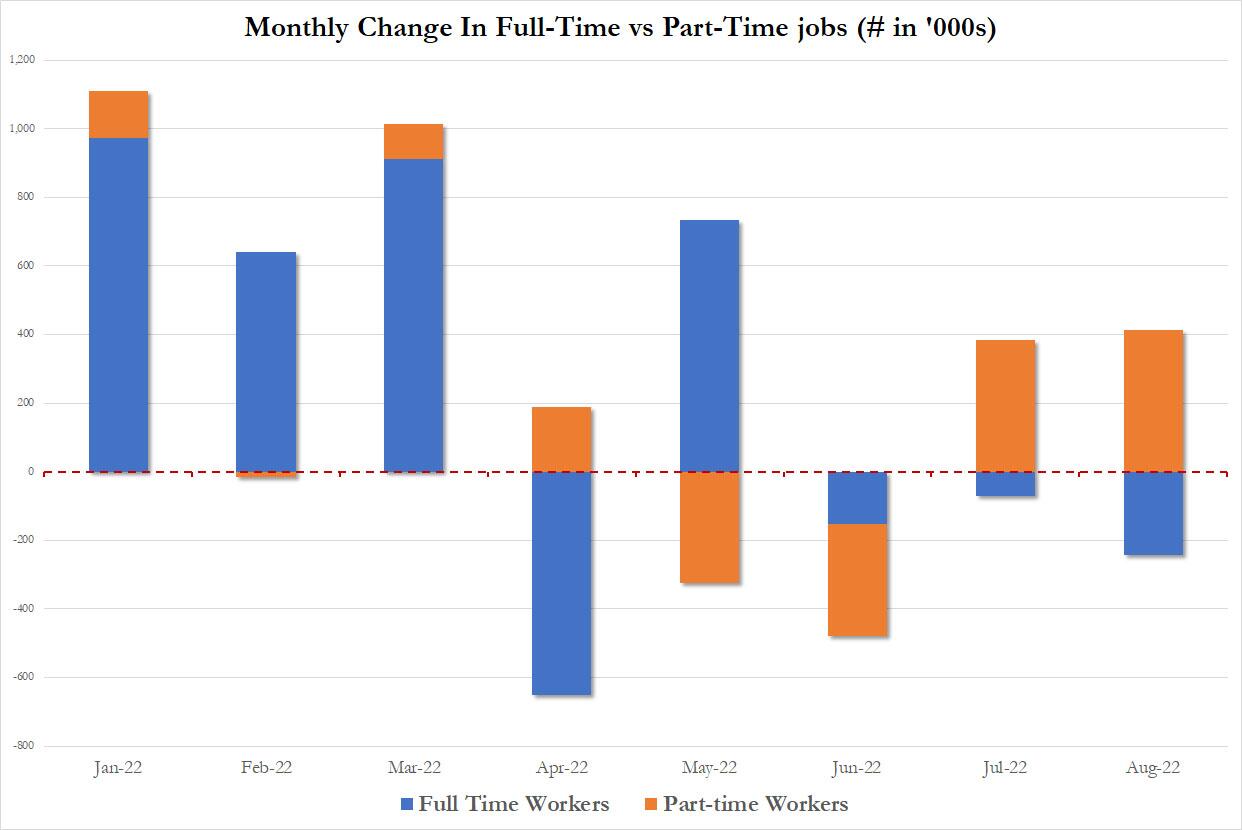 More ominously, if one extends this data, we find that since March, the US has lost 383K higher paying full-time employees, while gaining 335K low-paid part-time employees. Again, this is a time period over which the Establishment survey claims – without a breakdown in job quality – that 1.9 million total jobs have been added. 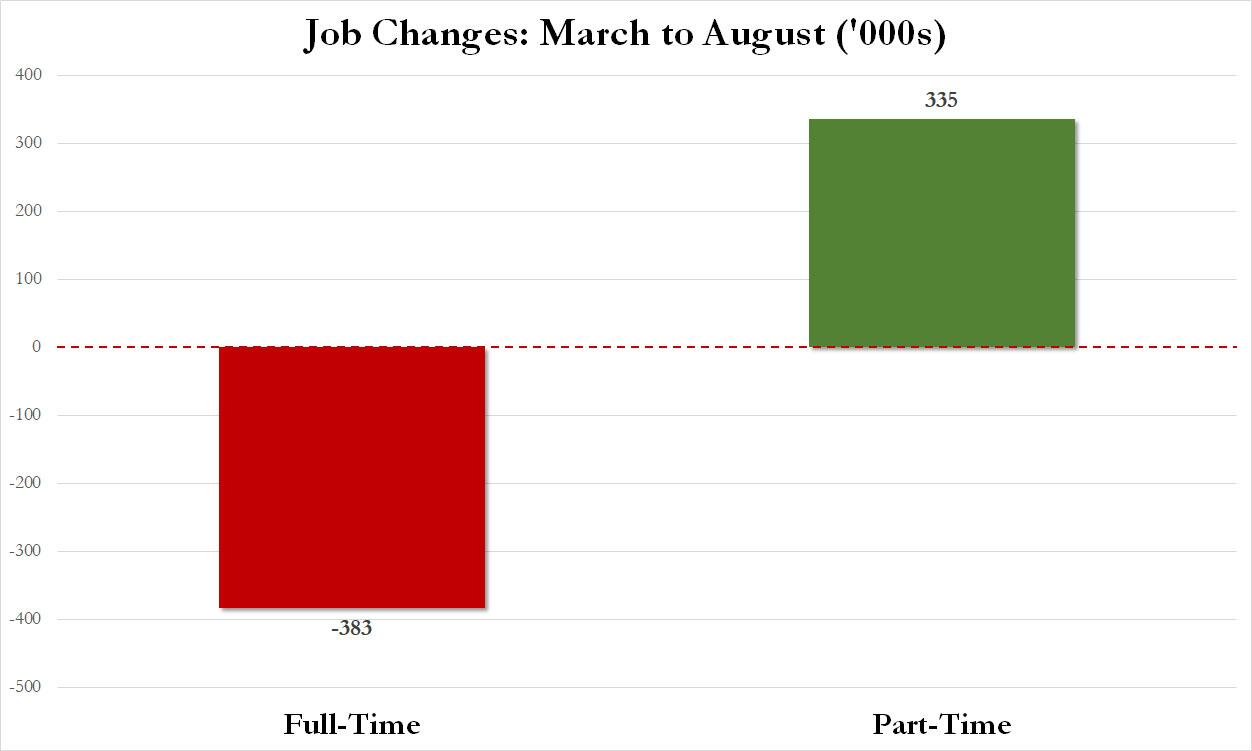 And even more remarkable: the number of multiple jobholders whose primary and secondary jobs are both full-time just hit another record high! Hardly the sign of a strong job market, one where people can afford to quit jobs at will.

So what’s going on here? The simple answer: Fewer people working, but more people working more than one job, a rotation which picked up in earnest some time in March and which has only been captured by the Household survey.

And since the Establishment survey is far slower to pick up on the nuances in employment composition, while the Household Survey has gone nowhere since March (which has benefited the low unemployment rate), the BLS data engineers have been busy goalseeking the Establishment Survey (perhaps with the occasional nudge from the White House especially now that the economy is in a technical recession) to make it appear as if the economy is growing strongly, when in reality all they are doing is applying the same erroneous seasonal adjustment factor that gave such a wrong perspective of the labor market in the aftermath of the covid pandemic (until it was all adjusted away a year ago). In other words, while the labor market is already cracking, it will take the BLS several months of veering away from reality before the government bureaucrats accept and admit what is truly taking place.

We expect that “realization” to take place a few hours after the midterms, because the last thing the Biden administration can afford is admit the labor market is collapsing at a time when true inflation – the one tracking items most people spend their money on – is not 8.5% but is over 30%…

Inflation for items most people spend majority of their income on 👇 8,5% wouldn’t be that bad. (Charles Schwab) pic.twitter.com/pWQs5OApDF