by Tessa Lena
in Cross-Posted, Opinions

Howling From Behind the Mask

I’d like to start with a story of a man howling from behind his mask.

“The other day, as I was waiting for a subway train, I suddenly heard soul-piercing howling. I looked around, and there he was, a man in a winter hat howling like a wolf, from behind a mask covering most of his face, howling from the depth of his gut, again and again.

He was not saying anything, not asking for anything, not being violent, just standing still, bothered by whatever was bothering him, and howling like a wolf, from behind his mask. After a while, somebody else across the tracks, howled in response.”

People were making remarks like, “Oh, it’s New York, what do you want.” And I was thinking about how that scene was a mirror of what has become of us after three years of biological poisoning and psychological abuse. Howling from behind the mask while waiting to be taken away somewhere is where we are right now.

In Denial of Abuse

Many years ago, I married an abusive man. He was very sweet initially, and then — gradually-then-suddenly — he turned into an irrational maniac who was messing with my head, acting physically violent and then frantically apologizing, yelling with a red face, gaslighting me, making me feel crazy, then acting violent again, then begging me to please not tell anyone because he was so embarrassed, etc. etc.

Ironically, the marriage had a very presentable facade, good parents-in-law and all, and I was ashamed to tell the world about what was behind the facade, or even admit it to myself. I was just steadily fading into a shadow of my former curious self. I became afraid to do things like go to the store and buy a can of juice because I thought I would end up buying the “wrong kind.” I was only nominally alive.

But I was none the less in denial of abuse, and I stayed in denial of it until the rug was completely and dramatically pulled from underneath my feet in every way, and I had nothing else to hold on to except my soul.

That experience was so bizarre, and the abuse was so intense that it took me years to heal. Many times, I cried to the skies and wondered why I had to go through a horror like that. Many times, I asked myself what compelled me to stay even a minute after he disrespected me, and why I didn’t leave. Looking back, I had bright exit signs positioned all along my way — that signs I ignored because I was concerned about the reputation of my facade.

But in 2020, I realized why I had to go through that. It was a way to learn a skill. My mistakes of the past helped me see through the lies and stay even-headed when abuse arrived in the form of “COVID response.”

When the state and the media and the so called “medical experts” started behaving in ways that were similar to how my abusive ex acted years ago — gaslighting, limiting contact with others, dominating people in every way — I knew immediately to put my emotional shield up and not allow them in. Life works in mysterious ways!

For poignant giggles, let’s take a look at the cliché Wikipedia article on “abusive power and control:”

“Abusive power and control (also controlling behavior and coercive control) is behavior used by an abusive person to gain and/or maintain control over another person. Abusers are commonly motivated by devaluation, personal gain, personal gratification, psychological projection, or the enjoyment of exercising power and control.”

“Manipulators and abusers may control their victims with a range of tactics, including, but not limited to, positive reinforcement (such as praise, superficial charm, flattery, ingratiation, love bombing), negative reinforcement (taking away aversive tasks or items), intermittent or partial reinforcement, psychological punishment (such as silent treatment, threats, intimidation, emotional blackmail, guilt trips) and traumatic tactics (such as verbal abuse or explosive anger).”

“Traumatic bonding can occur between abusers and victims as the result of ongoing cycles of abuse in which the intermittent reinforcement of reward and punishment creates powerful emotional bonds (that are resistant to change) and a climate of fear. An attempt may be made to normalise, legitimise, rationalise, deny, or minimise the abusive behaviour, or to blame the victim for it.”

Sounds familiar? I wonder why … And here is a cliché list of signs of emotional abuse:

Keeping all that in mind, here are two kids in Quebec saying on TV that the unvaccinated should probably be jailed, to the sound of cheering from the adults. Surely, those two kids didn’t come up with that idea themselves! (On a side note, I think that the parents of those kids have set themselves up for quite an old age. Their future might be less delightful than the future of the ones they gaslight.)

And here is the “wheel of abuse,” a chart that is often used in corporate environments when lecturing about domestic violence. Disclaimer: I do not endorse the “male privilege” part of the chart, this “privilege” talk is meant to “divide and conquer” and is probably designed by the alphabets — but the wheel is rather telling if you keep the “COVID response” in mind. 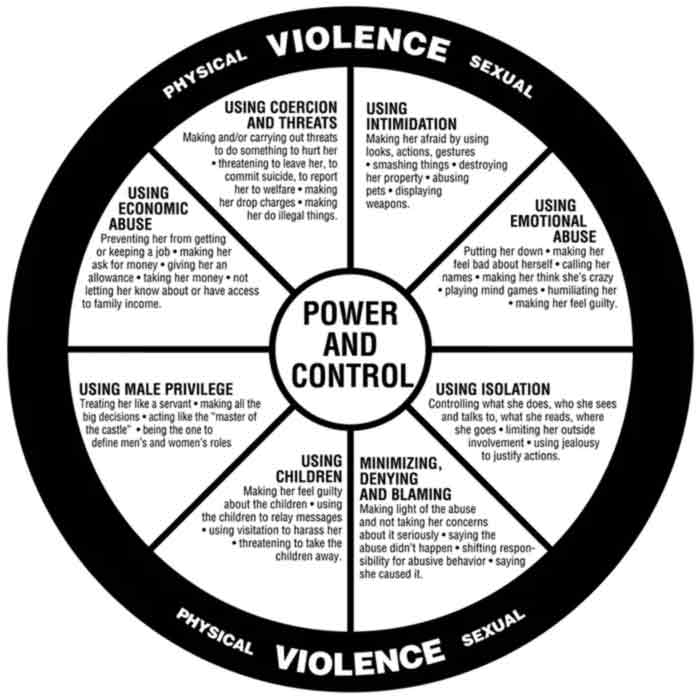 When it comes to the COVID response:

Any more questions? I have none.

A Blast From the Past

As a bonus exhibit, here is an LA Progressive article (originally posted by Common Dreams in August 2021). The author makes a case for vaccine mandates and for ostracizing the people who didn’t get the shot: “If libertarians wish to maintain their self-centered fixation on their own freedoms without considering others, let them do so — in indefinite quarantine from the rest of us.”

And what a classy image they chose to illustrate their point! There is nothing Nazi-like at all about this image! 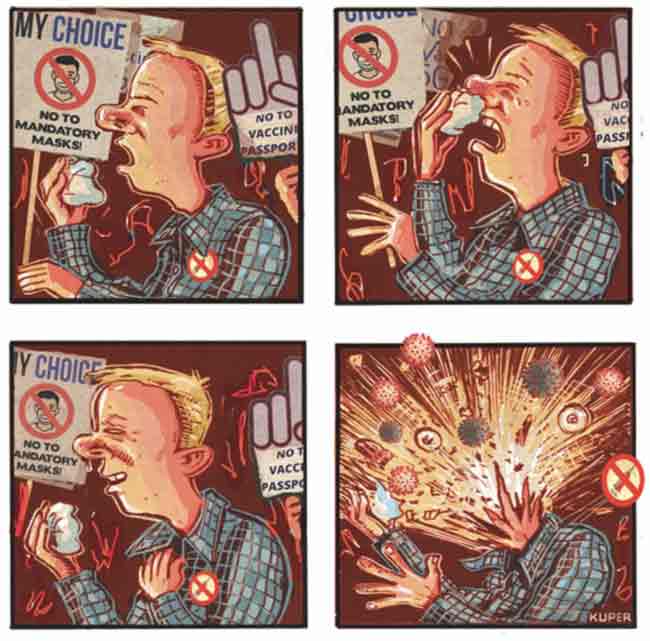 The Role of Manufactured Unpredictability

Remember how all throughout the pandemic, it often felt like they just couldn’t make up their mind?

For how long? Oh I don’t know. A couple of years? An eternity? You don’t want to kill the grandma, do you?”

And while there is no lack of irrationality in human thinking at large, it is interesting to put the constant change in the context of the classic torture manual, and just ponder that.

“Little is gained if confinement merely replaces one routine with another. Prisoners who lead monotonously unvaried lives … become dull, apathetic, and depressed. And apathy can be a very effective defense against interrogation. Control of the source’s environment permits the interrogator to determine his diet, sleep patterns, and other fundamentals.

Manipulating these into irregularities, so that the subject becomes disoriented, is very likely to create feelings of fear and helplessness … in short, the prisoner should not be provided a routine to which he can adapt and from which he can draw some comfort – or at least a sense of identity.” 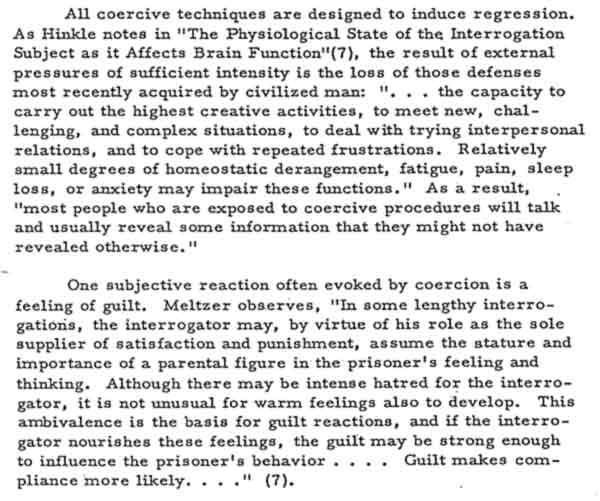 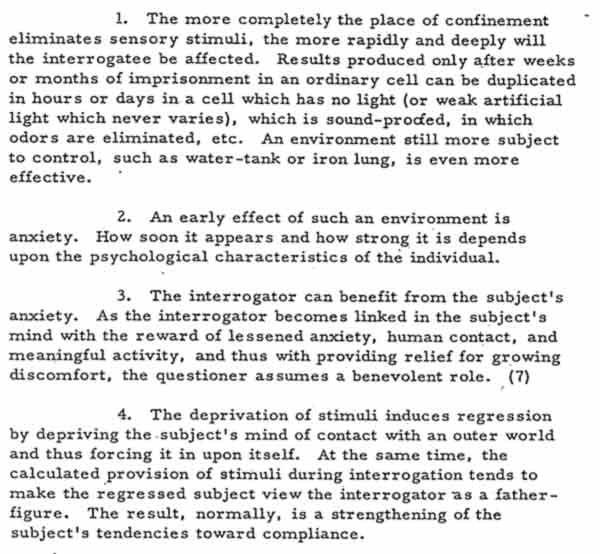 The Role of Embarrassment in Denying Abuse

I can speak for myself here. When I was in an abusive marriage many years ago, what kept me in denial was the embarrassment I felt over just how bizarre my life situation was. I had no explanation for that situation, a situation that was new to me, that would allow me to remain “respectable” and “successful.” And because it was important to me to remain “respectable” and “successful,” I just blanked out and rewrote the “rules of engagement” so as not to feel stupid.

I believe it applies to today’s situation. Those who went for the mainstream narrative with fervor will only snap out of it on their good will if they can do it without losing their face. Remember the tweets by those who got sick, presumably with COVID, for the third and the fourth and the fifth time — and they were still “grateful for being vaccinated and boosted”? Case in point.

The abuser exploits that feature and stealth-swaps respect with “lip service,” telling them that they will be superior to others — and thus “respected” — by being good boys and girls and complying with whatever the abuser says they should comply with.

And if we want to break the spell in their heads, if we have that goal, we can only achieve some success (if we are lucky, and if they are ready) when we do it with love and genuine care for their own well-being, with minimal anguish. Being limited to doing things with love is a feature of being on the “good side.” We have to do things with love and respect people’s free will, or else we swap sides.

The Importance of Self-Love

We are taught from an early age to externalize our and self-perception and the sense of self-worth — and even as young children, we learn to “value” ourselves not on the basis of on the integrity of our character and choices — but on the basis of opinions of “others.” And, yes, other people’s opinions can be precious when they those people mean well and simultaneously are spiritually grounded and know what they are talking about.

But a person who has all that would never make another person feel worthless — and yet, there are plenty of people (including abusers and various servants of the system of domination) that will gladly make us feel worthless and guilt-ridden unless we comply with their wishes and their opinions about what we should be like.

Through trial, error, and ongoing soul-searching, I came to the following important conclusion: the foundational emotion that helps us stand up to abuse — and not shrink in the face of threats — is self-love of the real kind. It’s that feeling where, when the world is rough on us, we can honor ourselves and bask in the loving warmth of our relationship with the spiritual powers who are protecting us all through the trials.

When we recognizing the sanctity of our own soul, the importance of our life’s mission, and the legitimacy of our existence and our right to dignity, even the abusers can’t compel us to commit self-betrayal.

To find more of Tessa Lena’s work, be sure to check out her bio, Tessa Fights Robots.