Tonight, Democrats and their RINO buddies will try to paint the J6 mostly peaceful protest as an existential threat to America. This is all about winning elections, not keeping people safe.

As we move closer and closer to the midterm elections, many candidates reach out to our show to get on the podcast or on our surging Rumble channel. I appreciate that and I want to help America First patriots win, but it’s refreshing when politicians come on the show to talk about TODAY, to talk about the problems we’re facing now and address them with proposed solutions. That’s why I’ll always have Congressman Troy Nehls back on as often as he’d like.

Here is my interview with Congressman Nehls, available on most platforms (other than YouTube and Spotify, of course) including Rumble and Apple Podcasts.

Democrats and their RINO brethren on the J6 Unselect Committee have one purpose in their current witch hunt: Preventing Donald Trump from being able to run for president again in 2024.

Congressman Nehls joined The JD Rucker Show to discuss this, the state of the economy, our current border crisis, and to give us an update on what’s going on with the Capitol Police who allegedly broke into his congressional office.

On the border, Nehls had one simple message: Reinvoke Donald Trump’s policies. “The ‘Remain in Mexico’ policy worked. It slowed down the caravans.”

Is the Biden regime just stupid? Are they completely incompetent? Of course not. As Nehls noted, it’s all part of the Democrats’ plan. 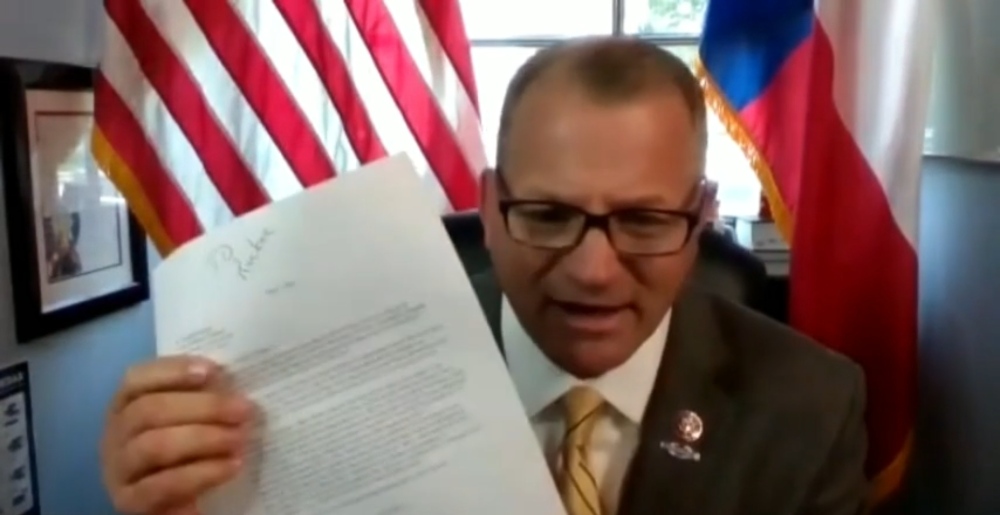 “JD, this is by design,” he said. “Don’t think this is a… you know, this crisis is man-made. It’s exactly what Democrats want. Eventually you’re going to look at amnesty down the road and one party rule.”

On crime, Nehls pointed out that the real problem isn’t your average, everyday Democrat. The people who are feeling the heat caused by crime-supporting radical leftist policies are not going along with the woke progressives, which we saw in action with the ouster of former San Francisco District Attorney Chesa Boudin.

As reported by The Washington Examiner:

San Francisco’s far-left district attorney, Chesa Boudin , was voted out of office on Tuesday after facing a recall petition over his criminal justice platform voters saw as soft on crime.

Several networks called the race in favor of the recall less than an hour after polls closed.

“People [in San Francisco] are angry. They’re frustrated. And I want to be very clear about what happened tonight: The right-wing billionaires outspent us three to one,” Boudin told his supporters after the election results poured in Tuesday night.

“Everybody wants to have safe and secure neighborhoods, but that extreme fringe, that extreme left, that group, the George Soros people that feel that actually law and order and having meaningful criminal justice out there is racist,” Nehls said.

Lastly, we discussed the January 6th Committee, which is going prime-time tonight with their spectacle. I asked Nehls what was motivating all of this. Are Democrats and their RINO brethren just trying to get to the truth and learn what can prevent future “insurrections,” as they like to label the mostly peaceful protests of January 6, 2021?

No. Nehls said it’s all about Donald Trump.

“That’s what this committee is all about,” he said. “It’s destroying Donald Trump for 2024. It’s NOT — people, understand — this is not about getting to the truth. This is not about how can we make sure that January 6 never happens again. They don’t want to ask the questions about why the Capitol Police were so ill-prepared to deal with that.”

The midterm elections are right around the corner and Democrats are in the worst possible situation with the failing economy leading the pack of a multitude of other failures. Nehls said the GOP was going to take back the House for sure and may be able to take back the Senate. But by putting this J6 witch hunt on prime-time television, they’re hoping to build a case for why they should keep control of the House and Senate.

It is imperative that patriots get the word out about the realities of J6. As sad as it is and as much as we don’t want to admit it, many of our friends and neighbors are gullible. They’ll see people crying during J6 testimony, talking about PTSD and how they thought they were going to die. Many of those viewing this will get the gaslighting the Democrats and their corporate media cronies want them to take.

Democrats hope to make more Americans care about J6, but that concern is only manufactured by constant propaganda. Americans care much more about the nation suffering under Democrat control.