by Megan Redshaw
in Cross-Posted, News

Editor’s note: In previous VAERS weekly updates, The Defender focused exclusively on U.S. reports in the sections where reports are broken out by age groups and types of adverse events. However, excluding foreign reports from these categories excludes thousands of vaccine injuries reported to the system, so those sections now include all — U.S. and foreign combined — reports submitted to VAERS in the categories indicated.

The Centers for Disease Control and Prevention (CDC) today released new data showing a total of 1,379,438 reports of adverse events following COVID-19 vaccines were submitted between Dec. 14, 2020, and Aug. 5, 2022, to the Vaccine Adverse Event Reporting System (VAERS). That’s an increase of 7,964 adverse events over the previous week.

VAERS is the primary government-funded system for reporting adverse vaccine reactions in the U.S.

The data included a total of 30,162 reports of deaths — an increase of 181 over the previous week — and 251,075 serious injuries, including deaths, during the same time period — up 1,959 compared with the previous week. 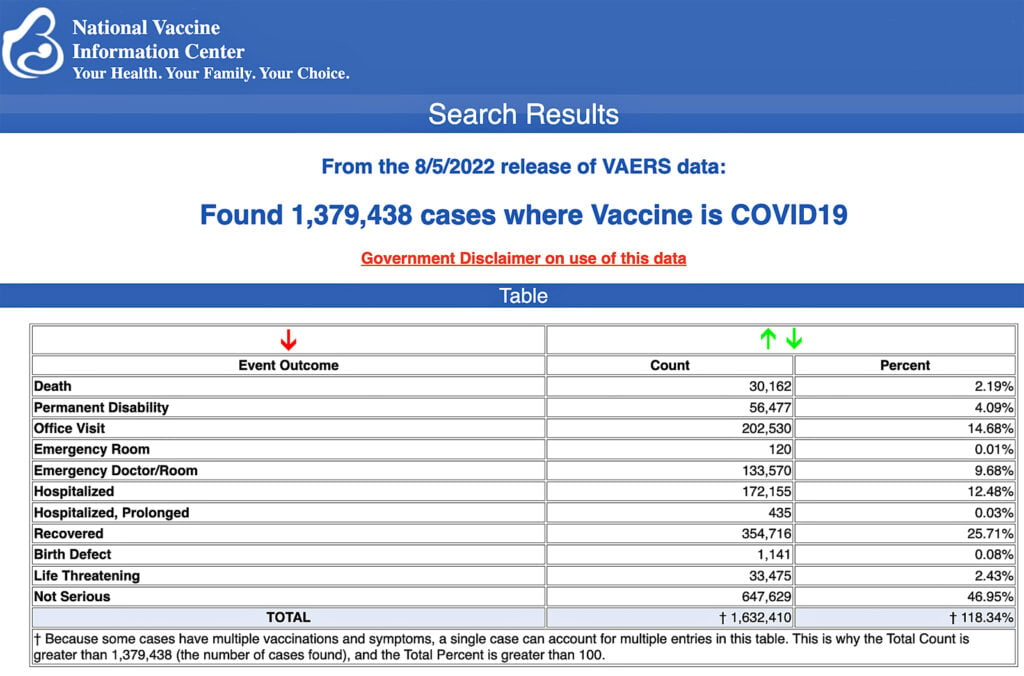 Every Friday, VAERS publishes vaccine injury reports received as of a specified date. Reports submitted to VAERS require further investigation before a causal relationship can be confirmed.

Historically, VAERS has been shown to report only 1% of actual vaccine adverse events.

The CDC on Thursday issued sweeping new recommendations as part of the agency’s efforts to overhaul its COVID-19 guidance.

“This guidance acknowledges that the pandemic is not over, but also helps us move to a point where COVID-19 no longer severely disrupts our daily lives,” the CDC’s Greta Massetti said in a press release.

Here are the biggest changes to the CDC’s guidance:

According to The New York Times, the CDC has been working for months on the new guidance which builds on previous guidance issued in February that reduced isolation times for those who get COVID-19.

The agency said it is making changes to its guidance now because “vaccination and prior infections have granted many Americans some degree of protection against the virus, and treatments, vaccines and boosters are available to reduce the risk of severe illness.”

According to The National Law Review:

“This likely will not be the last we hear from the CDC on this topic. Indeed, the CDC stated that it intends to issue more specific guidance for settings such as healthcare, congregate living, and travel.”

A study published Aug. 8 in The Lancet showed the effectiveness of the Pfizer-BioNTech COVID-19 vaccine against symptomatic infection among adolescents “rapidly declined over time,” waning from just 27 days after the second dose.

While protection against symptomatic COVID-19 dropped dramatically in both countries less than one month after the second dose, protection against severe illness — defined as hospitalization or death within 28 days — remained above 80% in Brazil from 28 days to 98 days and beyond.

The authors sought to assess protection against severe illness in Scotland but were unable to do so because so few cases of severe COVID-19 in adolescents in Scotland were reported during the time of the study.

The authors concluded that “two doses are insufficient to sustain protection against symptomatic disease” in adolescents and recommended more research be done on the need for booster doses.

A preprint study conducted during Thailand’s national COVID-19 vaccination campaign showed what one physician described as a “stunning” association between myocarditis and the Pfizer-BioNTech vaccine.

The study analyzed 301 participants ages 13-18 who were healthy and without abnormal symptoms after receiving their first vaccine dose. Participants with a history of cardiomyopathy, tuberculous pericarditis or constrictive pericarditis and severe allergic reaction to the COVID-19 vaccine were excluded from the study.

Researchers found that 18% of the 301 teens analyzed had an abnormal electrocardiogram, or EKG after receiving their second dose of Pfizer, 3.5% of males developed myopericarditis or subclinical myocarditis, two were hospitalized and one was admitted to the ICU for heart problems.

All patients were male and had abnormal electrocardiograms, particularly sinus tachycardia. Researchers said the clinical course was mild in all cases.

In an exclusive interview with The Defender, a U.S. Coast Guard (USCG) service member alleged the U.S. Department of Defense (DOD) is administering COVID-19 vaccines from vials of Pfizer’s Comirnaty-labeled vaccines that are not produced in a facility approved by the FDA.

Lt. Chad R. Coppin, in a July 30 declaration submitted to Sen. Ron Johnson (R-Wis.) under penalty of perjury, detailed his personal investigation into the availability and origin of Comirnaty-labeled COVID-19 vaccine vials at U.S. military facilities.

Coppin relayed his concerns in an interview with The Defender, as did Holly Freincle, the wife of a U.S. military service member stationed at Fort Detrick, Maryland, who corroborated Coppin’s claims that Comirnaty-labeled vaccine vials are appearing at military service facilities.

Until now, the DOD has claimed the Pfizer-BioNTech COVID-19 vaccine, administered under Emergency Use Authorization, is “interchangeable” with the fully licensed Pfizer Comirnaty vaccine — which until recently, was said to be unavailable at military facilities.

In his July 30 declaration, Coppin, who has served with the USCG since March 2002, reported that after a long period of unavailability, the “Comirnaty” vaccine began to appear at U.S. military facilities in June.