This week, we all learned how France is arming up 3,000 new “green police” to arrest and prosecute people for so-called “climate crimes” which could mean almost anything, including exhaling carbon dioxide.

Now, The Counter Signal is reporting that the Canadian government is constructing a new climate crimes prosecution and interrogation facility to do much the same thing, only it gets worse: This facility contains interrogation rooms and weapons armories. From TCS:

The Ministry of Environment & Climate Change Canada (ECCC) is building a new facility in Winnipeg that will be home to a firearms armoury, interrogation rooms, biological labs, media relations offices, “controlled quiet rooms,” and intelligence facilities.

The plans, which were drawn up by a firm in Winnipeg, open a window into Trudeau’s future plans for Climate Enforcement.

Down the hall from the proposed “Firearms Storage” rooms are several evidence rooms, interrogation suites, and adjacent recording rooms. 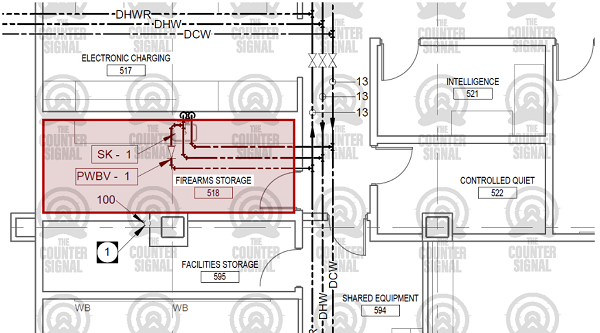 Notice, too, it has an “intelligence” room so that Canada’s intelligence operatives can spy on farmers and ranchers to see if they might be committing any “climate crimes” that could be prosecuted.

Fertilizing crops will soon count as an “environmental crime”

What sort of “crimes” will be prosecuted in Canada using these interrogation rooms and weapons armories? Global governments have recently declared war on Nitrogen, the key element in crop fertilizer, and they appear to be poised to start interrogating farmers who apply nitrogen to their crops. Soon, you will hear news of “climate confessions” from farmers who are thrown in prison for engaging in agricultural practices that might produce food.

Trudeau’s government recently announced a policy to reduce the use of fertilizer on Canadian farms by 30%. This policy has been widely criticized by farmers across the country and by provincial governments in the Western provinces, with opponents saying it will cripple the food supply.

Some observers have said that there is reason to suspect that these actions are the first steps in replicating the attacks on farmers that have provoked widespread unrest in the Netherlands and elsewhere in Europe.

While the federal government has not yet confirmed it, there is speculation that the water sampling we now know is underway will be used as baseline measurements to enforce reductions in fertilizer usage going forward.

Watch and share my powerful mini-documentary called, “The Globalist War on the Elements of Life” to understand more about the attacks on Nitrogen and Carbon: Brighteon.com/78f2882d-2c23-4b18-877f-4a5a65d4fb38

You are free to download, rip and re-post that full documentary. It is crucial to wake people up to the planned global famine that’s being rolled out right now.

The nation of Sri Lanka, which currently exists in a state of total collapse (government collapse, financial collapse, energy collapse, transportation collapse, debt collapse, food collapse and medicine collapse) began its plunge into destitution when its incoming president banned the importation of nitrogen fertilizer in 2021. This set off a cascading collapse that still hasn’t run its course.

As NaturalNews.com reported earlier this year:

“Rice production fell 20%, prices rose 50 percent, and the nation had to import $450 million worth of the grain. In Rajanganaya, where farmers operate on just a hectare (2.5 acres), of land on average, families reported producing half their normal crop harvest.”

The hardest hit area of Sri Lanka’s food economy is tea, which before the ban generated $1.3 billion in exports and provided 71 percent of the nation’s food imports.

“After the fertilizer ban, tea production crashed 18%, reaching its lowest level in 23 years,” Shellenberger adds. “The government’s devastating ban on fertilizer thus destroyed the ability of Sri Lanka to pay for food, fuel, and service its debt.”

Now, leaders of other nations want to follow the same path to mass starvation and destitution. Recent actions in The Netherlands targeted cattle and sheep herds due to their nitrogen production, claiming that cow urine is a danger to the planet. Farmers there are being ordered to cull most of their herds so that The Netherlands can meet its “nitrogen emissions goals” which are all part of a global scheme to cause mass starvation and population collapse.

This insane assault on nitrogen appears to be spreading, and if it is followed elsewhere, it will lead to global famine and misery, since about four billion people on planet Earth depend on nitrogen-based fertilizer to feed themselves.

Take away the nitrogen fertilizer and there’s only enough food to feed half the current population. The other half starves to death. That appears to be the goal. The scheme is already being implemented.

Again, if you aren’t yet coming to realize what’s about to happen, half the world will starve to death if nitrogen fertilizer is banned by world governments. This appears to be the eventual goal, although they are rolling it out over time (banning 30% now, then 50%, then 70%, etc.). Think Agenda 2030.

Get all the details on this and much more in today’s hard-hitting Situation Update podcast, which also features an interview with attorney Thomas Renz: Brighteon.com/4198e1a1-7aa6-4605-b76c-8ae15d9f970c

Kari Lake on Katie Hobbs: "This Woman Is a Monster"